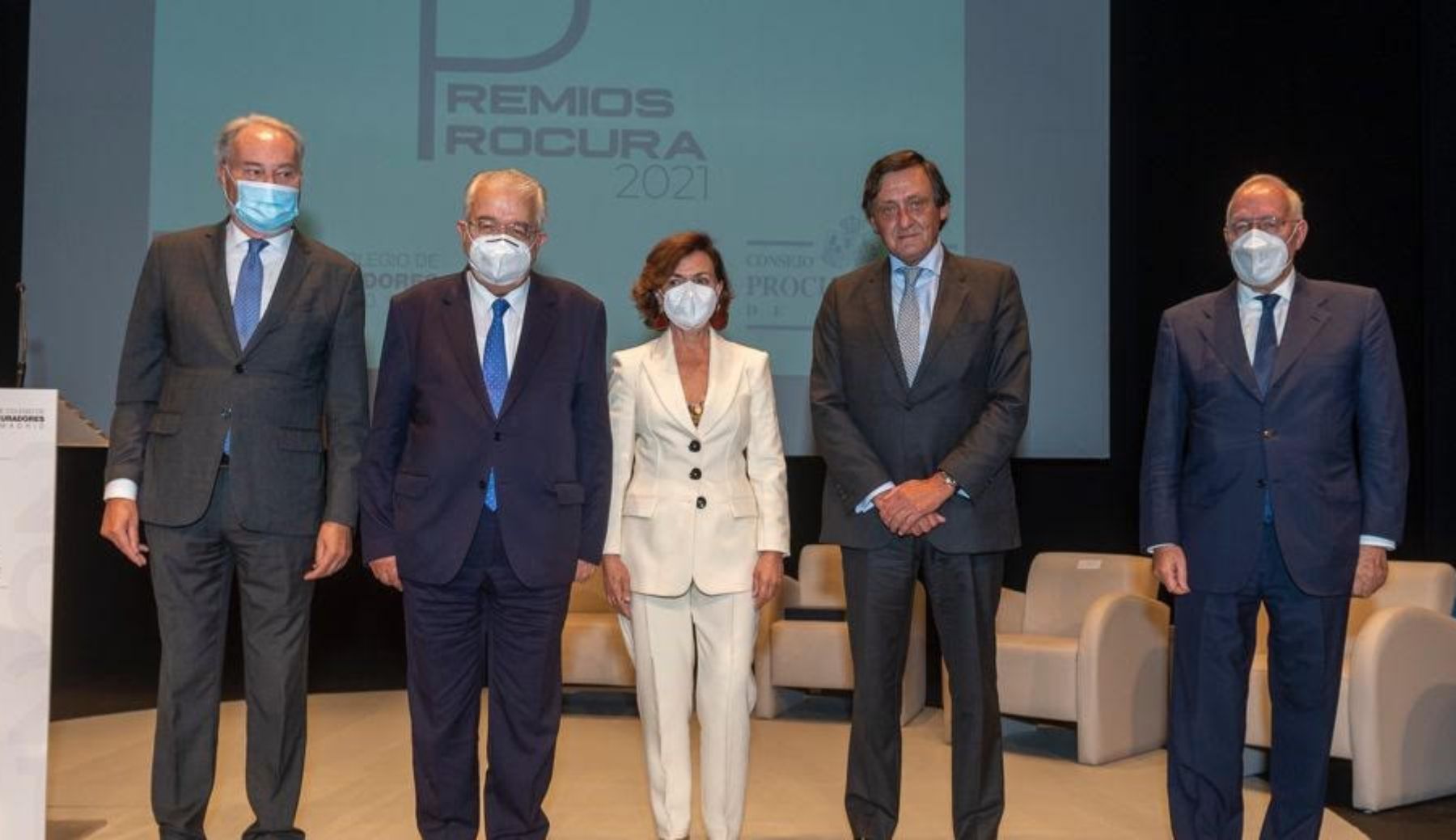 More than 250 attendees participated in the Procuratorate Awards, which this edition had as its main protagonist the First Vice President of the Government and Minister of the Presidency, Carmen Calvo, awarded the Coexistence and Tolerance prize of the General Council of Procurators of Spain (edition 2020). For its part, as is traditional, the College of Attorneys of Madrid awarded the “Gold Balance, in its 27th edition, to Manuel Pizarro, member of the Council of State as Vocal Nato, and current president of the Royal Academy of Jurisprudence and Legislation of Spain “for his extraordinary contribution to strengthening the rule of law as a public servant, in his capacity as state attorney, and for the national and international prestige that he holds as a jurist.”

The General Council of Procurators of Spain awarded the “Coexistence and Tolerance” award to Carmen Calvo for the work carried out in favor of Equality, in conciliation matters and, especially, in the fight against gender violence, from the different positions that it has been flaunted throughout its political career.

“The recognition of Carmen Calvo is the best example of the fundamental and shared character of the value of equality between women and men and of the need for support and defense for them from the institutions, starting with this house. It is also a political sign that constitutional values ​​demand and need to join forces, integrate positions and assume their importance and defense above political pluralism and especially partisan confrontation – the president of the General Council of Procurators of Spain, Juan, has remarked. Carlos Estévez during the opening of the event.

Pact of State and Execution

Two clear messages centered the speech of the President of the Prosecutors, within the framework of the delivery of the “Coexistence and Tolerance” awards. The first, the need for a large political agreement to undertake the necessary reforms in order to increase the efficiency and agility of the judicial bodies, and the second, the convenience of converting prosecutors, following the European example, into enforcement agents.

With this preamble, Estévez referred to one of the “star” issues for the Procuratorate at this time, first posing a question: what is the main problem of justice in Spain, especially within the civil jurisdiction: ¿The answer, detailed, is the execution. In the civil declaration the declarative process, he recalled, has “nothing to envy” the best of the advanced countries in our environment, even the United States, because it is of high quality, we have good judges, and it is of “reasonable speed.” . However, in the area of ​​enforcement “we got a very bad mark” because, contrary to what happens in other countries, there is no execution in Spain specialized in this task.

Article 117.3 of the Constitution, Estevez argued, establishes that the courts and tribunals will judge and “have the court executed”, which “obviously means that the execution can be delegated to someone.” I think it is time to attribute the execution to a profession like mine, since we have been requesting it for a long time and it is not a corporate measure, he stressed, but a measure to solve the problem in the way and manner of other countries around us, it is that is to say, with a profession that is in charge of the execution, always under the dependence and tutelage of the lawyer of the Administration of Justice.

Regarding the need for a political agreement or a great State pact, the president of the CGPE insists on the importance of dialogue, in which all the actors show and exercise the best will to reach consensus situations, and more in the world of Justice which is one of the fundamental pillars of the State.

“We need changes to keep up with the times. It is not difficult to reach a diagnosis of what is wrong, on that we are practically in agreement. The problem comes when it comes to providing solutions and the Procuratorate, as always, we have contributed many ideas, also supported by concrete institutional actions that support our commitment to define the future. We don’t have to call it a State pact, although it wouldn’t be bad either: let’s go back to the example of our constitutional fathers, and let’s just call it consensus, a precious word that is at the root of the principles of coexistence and tolerance and that always makes possible initiatives aimed at progress. and to the improvement of societies ”.

For its part, the Governing Board of the College of Attorneys, unanimously agreed to grant the Gold Balance, in its 27th edition, to Manuel Pizarro, member of the Council of State as Vocal Nato, and current president of the Royal Academy of Jurisprudence and Legislation of Spain “for his extraordinary contribution to strengthening the rule of law as a public servant, in his capacity as state attorney, and for the national and international prestige that he holds as a jurist.”

In his speech, the dean of the Madrid prosecutors, Gabriel de Diego, highlighted Manuel Pizarro’s brilliance in the financial and legal fields and “his commitment to countless social causes of a humanitarian nature in which he collaborates selflessly.”