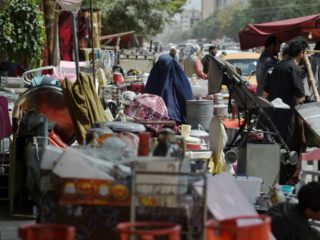 Crockery, household appliances, decades-old televisions, old sewing machines or carpets accumulate in the street markets of Kabul. They are the belongings of Afghans desperate to flee the country or simply to eat.

Since the Taliban came to power in mid-August, job opportunities and cash are scarce, due to the ban on withdrawing more than 200 euros a week from bank accounts.

“We have nothing to eat, we are poor and we are forced to sell these things,” says Mohamad Ehsan, who lives in one of Kabul’s settlements and went to the bazaar with two blankets to sell.

The man worked as a construction laborer, but now real estate projects have been canceled or suspended. “There were rich people in Kabul, but they have all left,” he told AFP.

He is one of many Afghans who flock to street markets to sell their expendable possessions, carrying them on their backs or hauling them in rickety carts.

He has experienced “change after change” in Afghanistan and is skeptical of Taliban promises of peace and prosperity while the price of basic food is skyrocketing, as was the case during the first Islamist regime between 1996 and 2001.

“You can’t believe any of that,” says Ehsan.

The impoverished country is also facing a drought, food shortages and enormous pressure on its health system caused by the outbreak of COVID-19 before the Taliban takeover that led Western countries to restrict their programs. of help.

The United Nations Development Program warned last week that the percentage of people living below the poverty line could rise from 72% to 97% by the middle of next year if there is no quick reaction.