Home
World
Karl Nehammer: The withdrawal of Kurz causes a political upheaval in Austria in the middle of the fourth wave of the coronavirus | International

Karl Nehammer: The withdrawal of Kurz causes a political upheaval in Austria in the middle of the fourth wave of the coronavirus | International 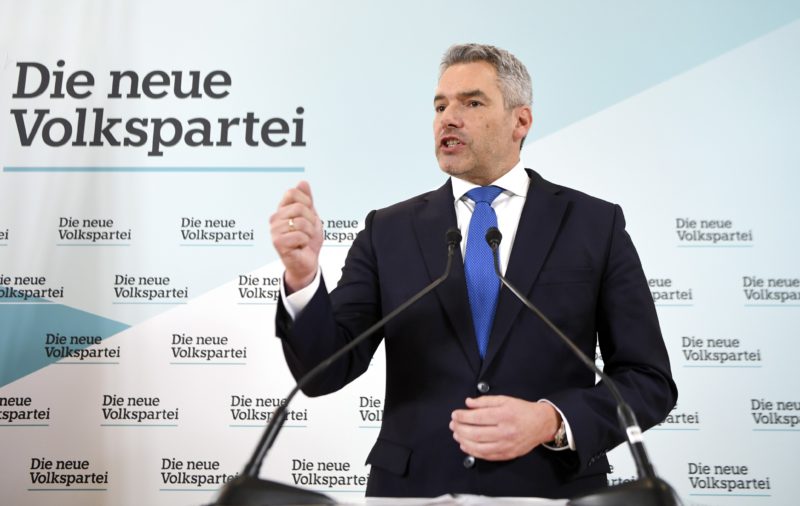 The withdrawal from politics of former Foreign Minister Sebastian Kurz under the shadow of a corruption case has triggered an earthquake in the Christian Democratic Party (ÖVP) and in the Government of Austria that has swept away the current Chancellor, Alexander Schallenberg, and several ministers . Schallenberg, who has held the post since Kurz resigned last October, already announced on Thursday that he considered that the leadership of the majority party in Austria and the head of government should be in the same hands. This Friday, the conservatives have named these two positions: Karl Nehammer, until now Minister of the Interior, takes the reins of the formation and the Executive of the coalition with the Greens. The unexpected turn in the political scene occurs in the middle of the fourth wave of the coronavirus and with the population confined to reduce the wave of infections.

The new leader of the ÖVP has highlighted in an appearance that his appointment has been unanimous in the party and that he considers it a “privilege” to assume his new responsibility. Nehammer, 49, has also announced changes in four ministries that will now be presented to the president of the country, Alexander Van der Bellen, who must give the go-ahead to the remodeling and to the new chancellor, who has already communicated the changes to the leader of The Greens and Vice Chancellor Werner Kogler.

Kurz’s era at the helm of the Christian Democratic Party has ended abruptly, although the downhill began several months earlier. To a first investigation of alleged false testimony in Parliament, the former leader added another in October for the alleged participation in a plot to pay with public money for surveys manipulated in his favor and place them in a media group. Although Kurz rejected the accusations and resisted for days to withdraw, he eventually gave in to pressure and proposed Schallenberg as a replacement to preserve the governing coalition with the Greens. The new chancellor has lasted less than two months, in which the image of being a puppet of Kurz has haunted him and the regional barons of the ÖVP have set the pace, forcing a new confinement due to the fourth wave of the coronavirus in the country, to which the head of the Government was against.

“It is not my intention and it has never been my objective to assume the position of leader of the party,” said Schallenberg, a career diplomat and weightless within the ÖVP, after the withdrawal of Kurz on Thursday. Shortly afterwards, the Finance Minister, Gernot Blümel, one of the former chancellor’s closest collaborators, also announced his resignation from his post, citing family reasons. This Friday, before the appointment of the new party leader, the Minister of Education, Heinz Fassmann, also made his position available.

Nehammer will be Austria’s sixth head of government in the last five years, marked by polarization around Kurz, who won the 2017 legislative elections after taking absolute power in the party. The young politician, now 35 years old, entered into a coalition with the extreme right that barely lasted a year and a half and was broken by a corruption scandal in which the radicals were involved. The alliance with the Greens, after new elections in 2019, has been maintained after Kurz’s resignation in October, and its leader, Vice Chancellor Werner Kogler, already highlighted on Thursday the good collaboration with Nehammer, despite the fact that both parties have collided for the asylum policy, in which the new Conservative leader has exhibited the hard line set by Kurz.

Unlike the resigned Schallenberg, Nehammer has strong support within the party and a strong profile of his own. The former military professional is a close ally of Kurz and an architect of the hard-line policy on migration, who served as the party’s secretary general. This Friday, after being blessed by the party, Nehammer has affirmed that his intention is to maintain the line maintained by the ÖVP within the government coalition that he has led with the Greens since January 2020. He plans to maintain the hard line of immigration control and to advance in the tax reform that has already begun and that, as it has been pointed out, has reduced the burden for pensioners and families with few resources. In addition, the candidate for new chancellor has stressed that he will promote, together with Los Verdes, the plans for measures against climate change.

Nehammer has also insisted on continuing the strategy against the pandemic in Austria, where the low level of vaccination has caused a harsh fourth wave of infections and deaths, and which includes the plan to impose mandatory vaccination from February.

While organizations close to the conservatives have welcomed the change at the head of the party, the opposition has criticized the crisis unleashed by the withdrawal of Kurz in full confinement. The Social Democrats, through the mouth of one of the leaders of the parliamentary group, Jörg Leichtfried, has spoiled the ÖVP “which turns an internal crisis into a crisis of government and the State in the midst of confinement.” “Once again, they are only interested in maintaining power,” said Leichtfried. The FPÖ ultras, for their part, have already demanded early elections since Thursday.

According to the latest polls, carried out after Kurz’s resignation in October, the ÖVP has fallen in voting intention to 23%, behind the Social Democratic party SPÖ, with 26%.