Keiko Fujimori asks for the nullity of 200,000 votes and the electoral authority calls the request “extraordinary” 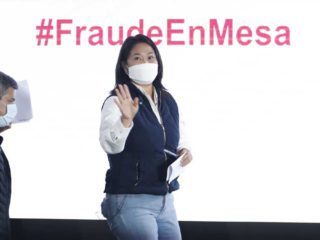 The Popular Force candidate for the Presidency of Peru, Keiko Fujimori, has presented actions of nullity in 802 polling stations in which their training has found “Irregularities”, which represent about 200,000 votes, which the applicant hopes “will be removed from the final count.” The president of the National Elections Jury (JNE) from Peru, Jorge Salas, has called the annulment actions filed by the presidential candidate Fujimori “extraordinary”.

Fujimori has appeared accompanied by two lawyers to report the presentation of these actions to the National Elections Jury (JNE), which would have to admit them for these votes to be annulled, as the candidate trusts, while Castillo continues to lead with 99 per cent scrutinized.

“Additionally, we are monitoring the challenge process, which are 1,200 minutes that we hope will later be counted in the final count of the JNE,” he said.

Thus, the Fuerza Popular candidate has said that if the 200,000 votes of the 802 tables in which requests for annulment have been submitted are added to the 1,200 minutes that are being analyzed by the JNE and that represent 300,000 votes, «they are still in I play 500,000 votes ».

“We believe that it is essential that (the 500,000 votes) be analyzed for the final count that the National Elections Jury has to carry out,” he added, according to ‘El Comercio’.

Regarding the annulment actions, the lawyer and former Congressman of Fuerza Popular Miguel Torres has stressed that the formation has discovered “a series of verified irregularities” that make it “clear” that “in a systematic way the Peru Libre party would have violated the electoral system ».

“Regardless of the results, we want to record the concrete facts that have occurred in these elections,” he pointed out, to delve into the fact that one of the “modalities” used to “break the popular will” would have been the “falsification of signatures of board members ».

Specifically, the lawyer has referred to 503 records nationwide, representing more than 125,000 votes, in which allegedly “the signatures do not correspond to those recorded in the RENIEC -National Registry of Identification and Civil Status- with the DNI” .

The president of the National Jury of Elections (JNE) of Peru, Jorge Salas, has described as “extraordinary” the annulment actions presented by the candidate for the Presidency Keiko Fujimori and her party, Fuerza Popular, on 802 polling stations, representing some 200,000 votes.

In statements to the Peruvian media RPP Noticias, Salas has indicated that in the presidential elections of 2011 only two requests for annulments were presented, while in the 2016 elections they increased to almost thirty, which represents an “important difference” with respect to the current situation .

Thus, it has refused to specify the time for the resolution of the challenges raised by Fujimori, since these must first pass through the special electoral juries, which would take about three days to call hearings and another three days to offer their response. After that, as Salas explained, they would go to the JNE, which would have other deadlines.

“As more than 800 have been announced, I think it would be reasonable to think that some minimum time should be taken to be able to decide what is pertinent without having to run over,” he added, to highlight that “no one would like three-minute resolutions with the material impossibility of analysis ».

Fujimori on Monday denounced “table fraud” by the Peru Libre party, his rival in the elections, Pedro Castillo, who was proclaimed the winner on Tuesday.

Regarding the denunciation of the candidate of Fuerza Popular, the director for the Americas of the NGO Human Rights Watch (HRW), José Miguel Vivanco, spoke on Wednesday, demanding that Peru “respect the results” and avoid accusations of fraud that lack “serious” evidence.

“In Peru, as in any democracy, electoral results must be respected,” Vivanco urged through his Twitter profile, where he stressed that “international human rights law requires that every vote be counted and respected.”

Meanwhile, the scrutiny is nearing its end reaching 99.126 percent with Castillo leading the election results with 50.2 percent of the votes compared to Fujimori’s 49.7 percent, as reflected by the ONPE on the portal results of the second presidential round held on June 6.

On the other hand, Fujimori has assured that it will always be “respectful” with what is determined by the National Elections Jury and the National Electoral Elections Office, although it has insisted on waiting “with prudence and serenity” and analyzing each of the requests. of nullity and the processes that are being carried out in the special juries.

“We welcome the decision of the JNE to carry out the deliberation of publicly challenged minutes and today it has been shown that there was also an intention to challenge many of the minutes in which Fuerza Popular has had a majority vote,” he said. reiterated.

The applicant has also added that the “defense” and “call” that she is making before national and international public opinion is not because of her candidacy, but “because of the respect for millions of Peruvians who are only looking for their vote is respected ».

Fujimori on Monday denounced “table fraud” by the Peru Libre party, his rival in the elections, Pedro Castillo, who was proclaimed the winner on Tuesday.

During the intervention of the candidate, Castillo, has urged, through a publication on his Twitter profile, not to fall into the “provocations of those who want to see this country in chaos.” “Let us continue firm and happy in this final fight that belongs to all Peruvians,” he added.

The supporters of both candidates for the Presidency of Peru have gathered this Wednesday in the streets, especially in the capital, Lima, while the tension increases in the country due to the adjusted results and the allegations of fraud.

The leftist candidate leads the election results with 50.2 percent of the votes to the 99,109 counted, while the right-wing candidate would lose with 49.7 percent, as reflected by the ONPE in the results portal of the second round of the June 6th.