Kevin Feige surprises with a cameo in an X-Men comic 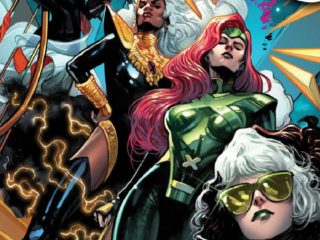 The Marvel Studios President Kevin Feige, was cordially invited to mingle with the X-Men at the Hellfire Gala of X-Men # 21.

As reported by Entertainment Weekly, Feige arrived in time for the X-Men # 21 special guest list, the last chapter of the Hellfire Gala story arc which hit the stores yesterday, June 9, 2021. The heroes of Krakoa were the center of attention at the luxurious party, but it was Cyclops who specifically caught Feige’s attention. “So what is your story?” Feige asked the X-Men captain, striking up a conversation. “Well, it’s complicated.”, replied Cyclops.

On the following pages, Cyclops proceeds to tell the story of his life to Feige, who presumably remains standing at the event reflecting long after the newly formed X-Men team leaves. The meeting seems to serve as a wink to those fans who have been wondering how the X-Men could be integrated into the MCU since Disney acquired the film and television assets of 21st Century Fox in 2019.

Screenwriter Jonathan Hickman gave life to the meta moment for his latest issue from this series, along with artists Nick Dragotta, Russell Dauterman, Lucas Wernick, Sara Pichelli, Frank Martin, Matt Wilson, Sonny Gho and Nolan Woodward. The series continued where House of X and Powers of X left off, presenting new threats to Krakoa and laying the groundwork for larger conflicts to come.

In any case, Hickman leaves X-Men to launch new series called Inferno. The series shares its name with the 1989 crossover, which dealt with the Madelyne Pryor’s transformation into the Goblin Queen and a demonic invasion of New York. According to Marvel, fans can wait “Revelations from the life of Moira MacTaggert, Nimrod’s revenge, vicious power games and more” when Inferno hits shelves in September of 2021.

As the X-Men continue their adventures in the comics, it is we may be waiting a while to see mutant superheroes appear in the MCU. But even if it is probable that let’s not see a new X-Men movie before 2023 at the earliest, that doesn’t necessarily mean Marvel won’t start laying the groundwork for the X-Men sooner. In fact, there are several ways that Phase 4 could lay the groundwork for mutants in the MCU.