King Felipe enjoys a journalistic evening in Madrid without Letizia 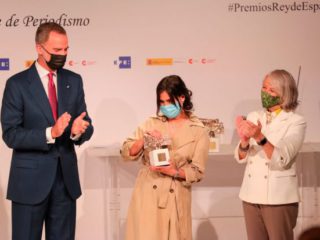 Quote ‘solo’ for King Philip. After attending the opening of an exhibition dedicated to the figure of Luis García Berlanga on Wednesday morning in the company of the Queen on the occasion of the centenary of his birth, in the afternoon, His Majesty has fulfilled another important commitment on his schedule.

Shortly after 7:30 p.m., the monarch came to the House of America, place chosen for the delivery of the XXXVIII edition of the International Journalism Awards ‘King of Spain’ and the XVII edition of the ‘Don Quixote’ award. An important appointment on Don Felipe’s agenda that, despite her past ties to the world of communication, Doña Letizia does not usually attend, although she has accompanied the King on occasion. Furthermore, in the case of the ‘King of Spain’ awards, they have been awarded annually since 1983, when they were created by the EFE Agency and the Spanish Agency for International Development Cooperation (AECID), with which Doña Letizia has a special bonding. In fact, the Queen picked up the witness from Doña Sofía a few years ago with regard to tasks related to Spanish cooperation and trips to different countries where AECID offers its support.

These awards are intended to recognize the informative work of journalism professionals in the Spanish and Portuguese language of the States that make up the Ibero-American Community of Nations and of the nations with which Spain maintains ties of a historical nature and cultural and cooperative relations. .

In his speech, King Felipe has made an allusion to the health crisis and its repercussions in the world of communication: «we live in difficult times in health matters; The appearance of the Covid-19 virus has made us face immediate challenges that will undoubtedly mark the future of many professions. And within the professions, of course journalism as well. And in this context, the pandemic has shown once again that the nature of the media is born to serve the citizen …”, He said, also referring that“ the battle against false news or decontextualized videos disseminated through social networks make it increasingly difficult to verify the information by the media themselves, and also by the consumers”.

This is the second solo meeting in the afternoon that the head of state has held so far this week. On Tuesday night, His Majesty attended the dinner in Alcalá de Henares on the occasion of the II Expansión International Economic Forum, held at the town’s inn. It will be next week when both Don Felipe and Doña Letizia finally participate in a gala dinner at the Royal Palace as a result of the first state visit to Spain after the pandemic, in this case, the President of South Korea and his wife. In fact, this country was one of the last that Their Majesties visited on a state trip before the outbreak of the health crisis.