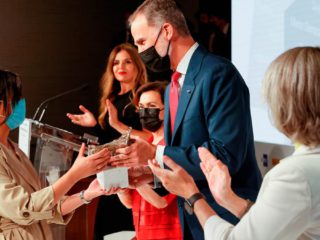 The King Felipe VI has valued the role of journalism and its professionals in the fight to combat ‘fake news’ or hoaxes that populate the networks today. The monarch emphasizes that «the DNA of journalism is found in data verification, in the search for reliable sources that detect false news and hoaxes that often spread much faster than the truth».

This has been underlined by Felipe VI in the delivery of the XXXVIII King of Spain International Journalism Awards and the XVII Don Quijote Award, which are convened annually by the EFE Agency and the Spanish Agency for International Development Cooperation (AECID), in a ceremony held has held at the Casa de América, in Madrid.

During his speech, the King highlighted the mission that journalism has today, which has been accentuated in times of pandemic: “Useful information, understood as a public service, such as that which is recognized here today, becomes more necessary if possible, since it contributes to form in a responsible way the criteria of the people ”.

The monarch admits that, at present, society is immersed in “information saturation” and, at the same time, in “disinformation”, which is why he considers journalists “more necessary than ever”. “The verification of data is a fundamental pillar in the construction of certainties or in the orientation within the uncertainty,” he said.

Felipe VI recalled that the world is experiencing “difficult times” and that these will mark the future of “many professions”, including journalism. However, in this context, the pandemic has once again demonstrated, in his view, that «The nature of the communication media is born for the service of the citizen».

Returning to the issue of ‘fake news’, the King has insisted that the “battle” against false news or decontextualized videos disseminated through social networks make it increasingly difficult to verify the information by the media themselves, and also that of consumers.

And he reviewed the current situation of journalism: «The journalistic reputation and the greater prestige of the profession depend on the quality of the information, but these are times in which immediacy, agility and style are of particular importance , which, on occasions, can condition the journalistic rigor itself. The opportunity to capture the attention of the digital reader in a news item is milliseconds ”.

To this is added, as he has warned, the changes derived from digitization, since “the transition to the digital age is transforming the ability to concentrate, the way of reading, of internalizing knowledge, of creating one’s own thought.”

The event was also attended by the first vice president of the Government, Carmen Calvo; the presidents of Congress and the Senate, Meritxell Batet and Pilar Llop, respectively; the Secretary of State for International Cooperation, Ángeles Moreno; or the third vice president and Minister of Labor and Social Economy, Yolanda Díaz, among other personalities.

The King praised in his speech the “excellence” of the ten awarded works, in which “different ways of telling the truth, rigorous, through writing, image or sound” are expressed. “Informative work that attracts because they create awareness, denounce, contribute to the education of societies, help to understand and ensure the values ​​of Democracy, for human rights, for equality between men and women,” he highlighted.

Thus, Felipe VI underlines the work of its authors, who “seek to give greater visibility to the lives of other people, to extraordinary or daily realities in which they are inserted, being the protagonists, responsible or even victims of those realities.” “And many times they put their own existence and that of their families at risk,” he lamented, remembering Roberto Fraile and David Beriain, the two Spanish journalists murdered last April in Burkina Faso.

In this edition of the Awards, 175 nominations have been submitted by journalists from the countries that make up the Ibero-American Community and from nations with which Spain maintains ties of a historical nature, as well as cultural and cooperative relations. “A kind of cultural, social, gender or environmental issues that show that our journalism is alive, which is, without a doubt, a meritorious achievement that reinforces the rights and freedoms of our societies,” he valued.

Like the King, the First Vice President of the Government, Carmen Calvo, has also highlighted the work of journalists and their work in democratic societies. “Information is essential, the good work of each man and woman who, beyond their profession, decide to collaborate with one of the fundamental rights that make it up, the right to have truthful information,” said Calvo, who has also dedicated a few words to Fraile and Beriain.

In total, ten prizes have been awarded. In the category of ‘Press’, the winner was the work ‘Hugo, historia de un corazón’, written by Pedro Simón Esteban in The world on September 30, 2019.

The jury has also recognized the work ‘Migrants: resist in the midst of the pandemic’, published in the Colombian newspaper ‘El Tiempo’ on June 16, 2020 by Jhon Torres Martínez (representative) and team in the category ‘Ibero-American Award’; and the ‘Television Award’ has gone to Nayare Menoyo for ‘Leonardo Padura, a squalid and moving story’, a piece broadcast by the Havana International Film Festival on December 16, 2019.

In the ‘Radio’ category, the award this year went to Juan David Cardozo (representative), Camila Andrea Sarmiento Méndez and Julio Sánchez Cristo for ‘Cliver Alcalá: The Venezuelan General who confessed his plan to assassinate Nicolás Maduro’, issued on ‘W Radio Colombia’ on March 26, 2020; and in the ‘Digital’ category, the award was won by the work ‘The videos of the social outbreak’, published in ‘La Tercera’ on December 18, 2019 by Tania Soledad Opazo Guerrero (representative) and team.

The ‘Environmental and Sustainable Development Award’ has been for Catarina Isabel Canelas Gonçalves (representative) and team for ‘Plastico: o novo continent’, broadcast by the Portuguese network ‘TVI’ on August 10, 2020; and the ‘Outstanding Latin American Media Award’ has gone to ‘elPeriódico de Guatemala’ for its 25-year history of good investigative journalism.

In the category of the ‘Cultural and Social Development’ award, the work ‘Calladitas siempre más’, published by ‘Univisión Noticias Digital’ on March 4, 2020, by Inger Díaz Barriga Leal (representative) and team; and in ‘Photography’ the work ‘The last hug’, published in ‘Q’hubo Medellín’ on July 25, 2020 and whose author is Carlos Alberto Emilio Velásquez Piedrahita, has been recognized.