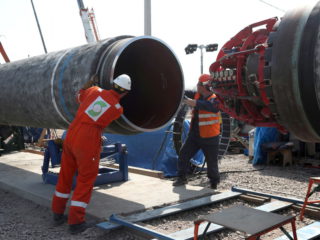 Russia welcomes certain points of the agreement between the US and Germany on the Nord Stream 2 gas pipeline, announced on Wednesday, but some of its provisions raise questions, Russian presidential spokesman Dmitri Peskov said Thursday.

In particular, the Kremlin spokesman has rejected accusations of Moscow’s alleged “harmful actions” both in Ukraine and in other countries. “Russia has not taken any harmful action. Nor is it undertaking them, “he emphasized.

Second, Peskov stressed that his country has always been and continues to be a responsible guarantor of energy security. “I want to remind you that the Russian president has repeatedly said and made official statements that Russia has never used energy resources as an instrument of political pressure,” he stressed.

Regarding the potential extension of gas transit through Ukraine after 2024, the spokesman pointed out that the Kremlin is ready to discuss it, but clarified that “it is about a matter of feasibility and profitability exclusively economic “.

At the same time, he stressed that, while this agreement may be expanded by Ukraine and Russia, Moscow “is not mentioned in any way” at this point.

The spokesman also indicated that the Kremlin expected to see in the agreement signals to the Ukrainian authorities about the need to show responsibility and provide economically acceptable conditions for the continuation of the transit, but these were not included in the text of the document.

According to the US Undersecretary of State, Victoria Nuland, on Wednesday, Germany has promised to take measures on its own against Russia and to support actions at the European Union level in case Moscow seeks to use energy as a weapon or undertake aggressive action. against Ukraine.

These measures, including sanctions, would focus on “limit export capabilities Russian companies in the energy sector, “Nuland explained.

Also, Berlin will have to seek a 10-year extension of the agreement between Kiev and Moscow on gas transit that expires in 2024, said the undersecretary of state.

In turn, the President of Russia, Vladimir Putin, had a telephone conversation with the German Chancellor, in which both leaders showed themselves satisfied with the upcoming completion del Nord Stream 2.

During the call, Merkel also briefed the Russian president on the results of the discussion of the situation around the gas pipeline in her recent talks with US President Joe Biden in Washington.