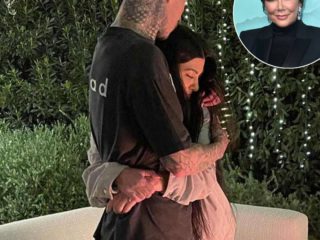 It’s safe to say that Kris Jenner is a proud member of Team #Kravis.

As Kourtney Kardashian and Travis Barker continue to document their love story on social media, fans of the couple may be curious what matriarch Kris thinks of their relationship.

During an interview with On-Air With Ryan Seacrest, on June 10, the team of iHeartRadio praised the couple’s romance, prompting Kris to reveal that she thinks it’s amazing.

“Isn’t that great?” She shared with Ryan Seacrest. “I know, it’s for the best.”

And when Ask Rad Asked Kris to share her thoughts on Kourtney’s latest social media post that featured Travis’s blood, the Jenner admitted she was just trying to keep up. “Here’s the thing. I don’t know what that means,” Kris joked. “I should have a little chat with Mrs. Kourtney and find out what’s going on.”

Earlier this week, the Poosh founder raised a few eyebrows when she randomly posted a vial of the rocker’s blood. Blink-182 in your official account. Instead of explaining further through text, Kourtney chose just a black heart emoji.

Although it’s not like the family has a history of keeping things close to the chest after 20 seasons of Keeping Up With the Kardashians.