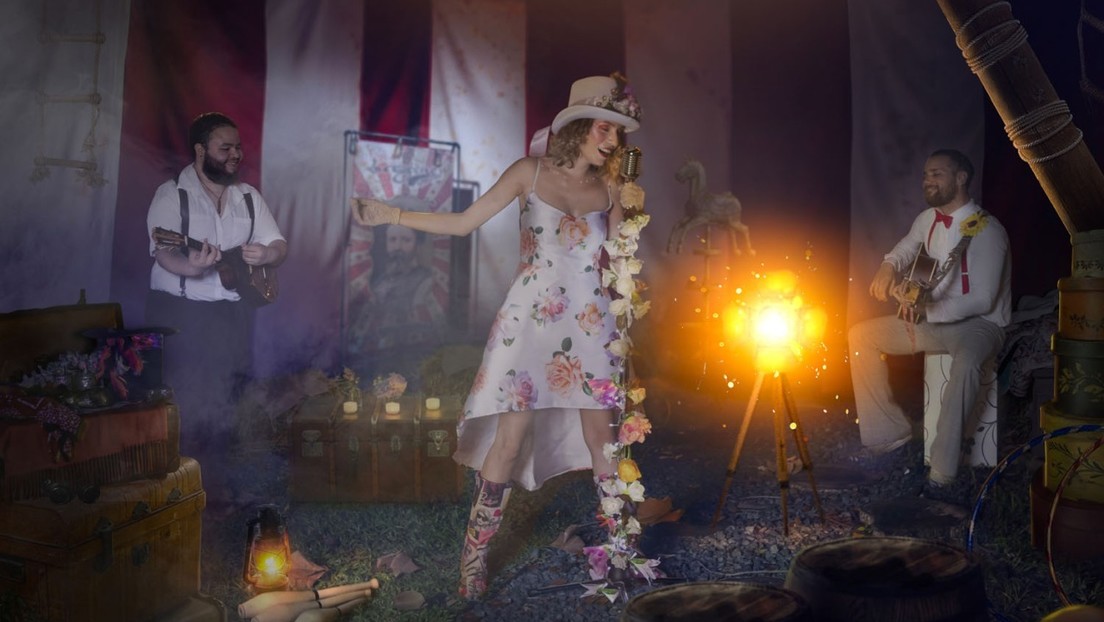 La Scène is a Latin American musical group that defines itself as multicultural and collaborative, with a deep environmental awareness and promoter of values, to try that humanity is more empathetic and supportive, that it respects equality, freedom of thought, diversity and the union between nations.

Based in Panama City, this band is characterized by providing joy and irreverence in their presentations, in which they interact with the public with a circus show that fuses the performance of unconventional instruments with the interpretation of genres such as gypsy jazz, rock, pop, blues, folk, and indigenous music from Africa and Latin America.

One of the peculiarities of this grouping is perform its aesthetic and scenic proposal with recyclable materials, inspired by vintage and with references to the fashion that was created between the 1930s and 1970s.

Zapata, who is in charge of creating the group’s costumes and stage elements, commented in an interview with MRT that his interest in haute couture and music comes from the influence of his great-grandfather, who was a tailor and musician.

“My mother and aunt are also seamstresses and from a very young age I was immersed in that world. When there were fabrics left I always grabbed them and transformed themThat led me to work from a young age with my own designs, “he says.

The vocalist of La Scène, as well as the rest of the members of the band, raise their banner of art against “unbridled consumerism”, due to the negative impact it generates throughout the planet “without any kind of distinction”.

“I have never been a consumerist,” says Zapata, “and I am aware of the problem generated by climate change that We are urged to attend and understand as humanityWell, we see how all these disasters are caused by ourselves, by not caring for the planet. “

For her, the main thing in a situation like the current one is encourage the saving of raw materials and reuse processed products, such as plastics, synthetics and textiles, beyond recycling.

“The vast majority of people throw something away after a single use, and that ends up polluting the seas, rivers, beaches, or killing animals of different species and destroying the planet’s biodiversity for years,” emphasizes the vocalist . Given this, his proposal is “reuse and transform”.

And adds: “I make art and that is what I try to implement with La Scène, that is not only costumes but also scenery. Thus we give our contribution to the planet and to transform consciousness “.

For Daniel Pinedo, The scene has its own “ideology of life” and is based on the phrase: “Do it yourself”. A vision that, he says, has allowed them to evolve and advance with their own hands.

“All our music and audiovisual proposal is made by us. The shows, the performance, the aesthetics, the arrangements and compositions, the recordings, everything, and although it is hard, it fills us with satisfaction “.

He points out that the group also works with a “collaborative” philosophy with which they have managed to achieve ad honorem support from musicians, technicians, designers, photographers and professionals from other areas, that commune with the ideas they seek to project and thus form part of the group.

“We have friends scattered all over the world, who contribute and help us to carry out this beautiful project. La Scène is an opportunity, an outlet to counteract so much emptiness in the world and in current music, such as reggaeton and trap, which only introduce antivalues. We are faithful to culture, to conscience, to the union between nations, to equality and solidarity, “he says.

How was La Scène

The band, officially, was formed in 2014 when Daniel and Gaby – a couple with two children – decided to formalize the project that they had started with other friends who practiced circus art in Caracas and Barquisimeto, the Venezuelan cities where they were born.

In Panama they started with presentations in the streets from the capital, playing their own songs and versions of other artists adapted to their style, which allowed them to earn some money to live for two years and meet other musicians of different nationalities, who began to collaborate and contribute their influences to the band .

Musicians from Colombia, Mexico and Germany passed, until in 2018 the third permanent member of the group enters, the Venezuelan Carlos Lucero, originally from the Anzoátegui state, incorporated the cuatro —a stringed instrument— as the main element to interpret South American and Central American rhythms adapted to the style of La Scène.

Then others joined three Panamanian musicians. In 2019 Roderick Zúñiga arrived, at the beginning of 2020 Bryan Gumbs entered and at the end of that same year Diego Collado joined.

“We have recorded and shared presentations with musicians from Colombia, Germany, Mexico, Panama and other parts of the world, musicians who come and go on their way but leave their contribution to us. Thus, we have incorporated instruments such as saxophone, trombone, trumpet, clarinet, flute, among many others, “explains Pinedo.

The latest track they released, he says, is particularly special for La Scène. “Magic Powder is a song that defines us, it has a Big Band Jazz arrangement with guest musicians from Chile, Germany, Colombia, Panama, Venezuela, and people who recorded from many parts of the world. “

“From town to town”

In the seven years of history, the band has toured different towns in Panama through a particular method that consists of take your instruments, get on a bus and go to different places to show their music in squares, beaches, streets and festivals.

“We are not stopped by the fact of not having a large infrastructure behindWe go from town to town by bus, playing. So we got to the island of Bocas del Toro, where we performed at a Festival and won it, “says Pinedo.

With that triumph they were awarded with the recording of an album of which they have advanced two songs that sound on their digital platforms: Magic Powder and a version of Through rose-colored glasses, song written by composers David Mack, Louis Guglielmi and Édith Giovanna Gassion, better known as Édith Piaf.

The recordings of his second album began in January 2021 and they say that it will be “a great circus show, recorded by chapters, as if it were a single story that is discovered as the scenes progress.”

The grouping also has a album study entitled “A very Gypsy Christmas with La Scène”, published in December 2020.

During the pandemic, its members have had to face the phases of confinement and to survive they had to seek income off stage in different trades.

However, they have already begun to make presentations while resuming the plans that had been paralyzed.