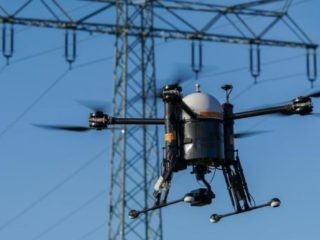 Flying drones take spectacular aerial shots, but the drone pilots must at least have some experience for their safe flight. Because if a drone gets out of control in the approach path of an airport, it can become a danger.

Overflights for espionage recordings are of course also undesirable. Last but not least, thanks to the steadily growing payload, drones could also be loaded with explosives and used for terrorist attacks. Against these unwanted multicopters has now the French company Cilas in Orléans – part of the Ariane group – developed an effective laser cannon that can shoot down small drones in flight.

The laser system – called HELMA-P – was able to prove its precision a few months ago. From the ground, the laser targeted drones at speeds of up to 50 kilometers per hour. Aiming was supported by a radar system. But two cameras – one for an overview of the airspace, one for focusing on the drone – are sufficient to be able to locate targets up to a kilometer away.

The laser beams currently have an output in the single-digit kilowatt range. But lasers with significantly more powerful powers are under development in order to be able to extend the range, among other things. In contrast to classic projectiles or small rockets, lasers reduce the risk of collateral damage. Because if a drone is missed, the laser beams into the sky without any further consequences.

Protecting the airspace of airports

There is no shortage of possible areas of application for this laser defense. For example, airports could protect their airspace from misguided hobby drones. But power plants, industrial plants or military areas could also destroy espionage drones with the lasers.