Latin America can avoid another “lost decade”, says the president of the World Bank 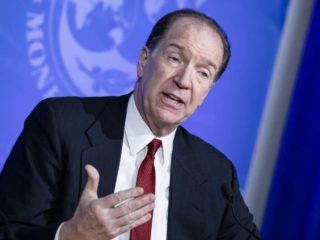 The Latin American and Caribbean region can avoid another “lost decade” like the 1980s despite the strong impact of COVID-19, World Bank President David Malpass said on Wednesday, offering some clues.

“Another lost decade is avoidable, especially given the region’s energy capacities, tourism and biodiversity. Some of the biggest gains in prosperity have come as a result of crises,” he said.

Malpass did not avoid the “serious problems” of the region by participating in a forum of the Andean American Associations, which brings together the first chambers of commerce of Colombia, Ecuador, Peru and Venezuela in the United States.

“The social impact has been devastating,” Malpass stressed. Some 24 million people lost their jobs and some 28 million fell into poverty, according to WB estimates.

As in the 1980s, when the region was forced to tighten its belt to meet its debt payments generated with international organizations, the debt burden is equally heavy and difficult to restructure.

But “it’s a different type of debt that requires different treatment,” Malpass warned.

Now, he explained, sovereign debt includes Eurobonds, domestic bank debt, and debt with Chinese institutions. Each tends to carry high interest rates, and negotiating for new due dates may not be discussed at the Paris Club.