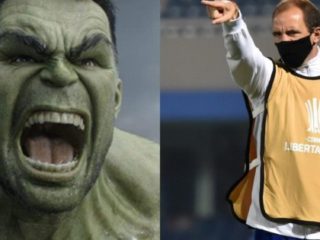 On tuesday night Boca Juniors faced Atletico Mineiro within the framework of Liberators cup and after a 0-0 draw, the popular Argentine club lost 3-1 in the penalty shootout. After the hard confrontation between both teams, a pitched battle was unleashed between stadium police and the team of the xeneixe club. In fact, Leandro somoza went viral for appearing in one of those episodes nothing less than “imitating” Hulk.

Leandro Somoza is one of Boca’s assistants and yesterday he starred in a moment that instantly became viral on the networks. After the defeat of his team, a particular conflict took place that turned into kicks and blows. But it did not happen between the fans of the clubs, but between the police of the Mineiro stadium and the Boca squad. Apparently, officers attacked some of the club members in the locker room area and there the confrontation began.

In fact, it is at that moment that Somoza appears in “action”. A short clip was released in which you can see the ex-footballer grabbing a fence in the style Hulk so that the agents do not pass to that place. How could it be otherwise, the episode became highly commented on Twitter and not only was compared to the iconic character of Marvel, interpreted by Mark Ruffalo, also with Hodor from Game of Thrones.

Although other references to popular culture such as characters from The Chronicles of Narnia and the Lord of the Rings also came out. “Somoza sacrificing himself to stop Mineiro’s safety as Hodor in GOT”, “As the minotaur in the chronicles of narnia”, were some of the comments from users.

The truth is that after this incident the Xeneixe delegation had to spend several hours at the police station until finally around noon on Wednesday they were able to transfer to the Belo Horizonte Airport to return to Buenos Aires. Upon arriving in the Argentine city, they must undergo antigen testing and it is not ruled out that they should be isolated.