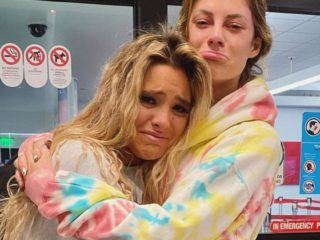 Lele Pons is a famous Venezuelan influencer and singer who has recently worried her followers, since she wrote a mysterious message on her Instagram account in which she seems to say goodbye.

This time the 24-year-old has left a text that says: “Mental health is extremely important! It’s okay not to be happy all the time. It’s okay to show your vulnerable side too! You’re not alone!

In the same speech he expresses: We all have our low and good days! However, it is essential to take care of your mental health and get help. Today I will take a break to do it. I love you guys and we will be back soon

The Venezuelan star did not explain what the health problem for which he was retiring was about, but it was enough to immediately see the signs of support from great friends and figures of the show and fashion, as well as his fans.

“I love you so much sister!”, Wrote the famous American socialite Paris Hilton, in support of the singer. The Mexican model and actor Juanpa Zurita also commented on the publication, “Ánimo Lele, I love you”. Prince Royce, the prince of bachata, left several hearts.

It should be noted that J Balvin, Willie Gomez, Mala Rodríguez and her friend Hannah Stocking were other celebrities who left words of support, among the 13 thousand comments and more than 2.4 million “likes” generated by the post.

In June of last year, in the video series “The Secret Life of Lele”, which he posted on his official YouTube account, Lele Pons revealed that he suffers from Tourette syndrome, a disorder that causes unusual movements or sounds and that it can also cause anxiety and depression.

This could be the reason why the artist moves away from social networks, since if we remember on that occasion she said: I have Tourette syndrome. I taught myself to hide my tics from everyone and spent years being ashamed of having this condition.

It should be noted that Lele Pons managed to become a celebrity with his publications on social networks and a particular style that makes his more than 43 million followers laugh on Instagram.

Did you know that the Vatican canceled all events for this Easter 2021? Follow us on Facebook to stay informed.