Virtual and from the room you use for your telematic meetings. Queen Letizia has intervened this afternoon in an event focused on the challenges of people living with Rare Diseases, which was held within the framework of the United Nations High Level Forum.

The event has been developed under the title “On the road to recovering from Covid-19 and achieving the Sustainable Development Goals: let’s address the challenges of people living with a rare disease as human rights, a priority for sustainable development ”. It is a milestone and one more step in Spain’s support towards the approval of the UN Resolution on Rare Diseases, for which the ERDF has been working for years together with several international platforms to urge all member states to develop policies that respond to families living with these pathologies or seeking a diagnosis. A Resolution that will allow the greater recognition of Rare Diseases at the international level.

Intervention of the Queen in the specific event on #Rare Diseases that drives @SpainUN in parallel to the High-Level Political Forum on Sustainable Development of the @A.

On this occasion, Doña Letizia addressed the audience in Spanish. In her speech, the Queen insisted on the importance of the resolution being passed and once again demonstrated her commitment to Rare Diseases: “Spain fully supports this draft resolution that, we hope, generates the disposition, will to act and commitment of all so that the minority diseases that affect so many millions of people impact their lives in the least painful and disabling way. It is our responsibility », has stressed.

For this appointment, the Queen has recovered from her wardrobe a basic design by Hugo Boss, sleeveless and midi length, with a straight silhouette and a matching turquoise belt that she recently wore at a ceremony at the Palacio de El Pardo and that premiered on a trip to Argentina. She has combined it with matching stone earrings from the Coolook brand. As for the beauty look, he has opted for a natural makeup emphasizing the look and has worn loose and very straight hair. 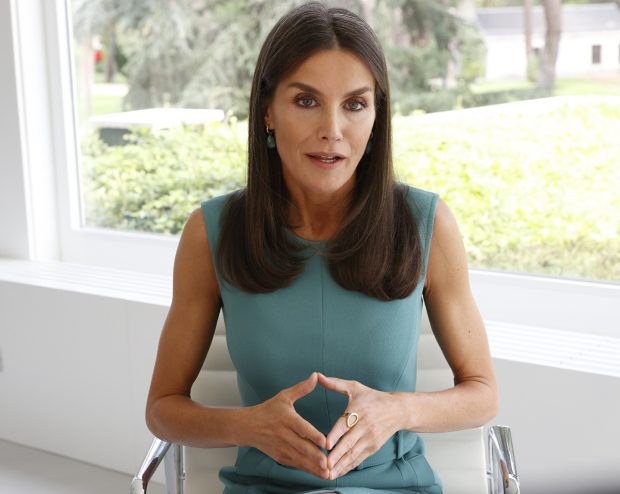 Queen Letizia’s commitment to Rare Diseases is very solid and firm. For the community of people living with a disease of this type, a UN Resolution is a cross-cutting step towards global recognition and greater visibility. It has the potential to launch a wave of political action at the international and national level. If adopted, the text could become a benchmark to substantiate the claims of the rare disease community nationwide.

Spain had already confirmed that it would be one of the countries that will promote the approval of the UN Resolution on Rare Diseases. It did so within the framework of World Rare Diseases Day, when people living with a rare disease, organizations, governments, representatives of the UN, civil society and political leaders, joined the event organized by the International Network of Diseases Raras, in conjunction with the NGO Committee for Rare Diseases and EURORDIS, the European Alliance for Rare Diseases.

Tomorrow the Queen will resume her joint agenda with Don Felipe, attending one of the essential appointments on her calendar. Their Majesties will participate in the inauguration of a new edition of ARCO, the Contemporary Art Fair that is being held these days in Madrid.

Dollar Falls as Investors Look for Signals from Central Banks