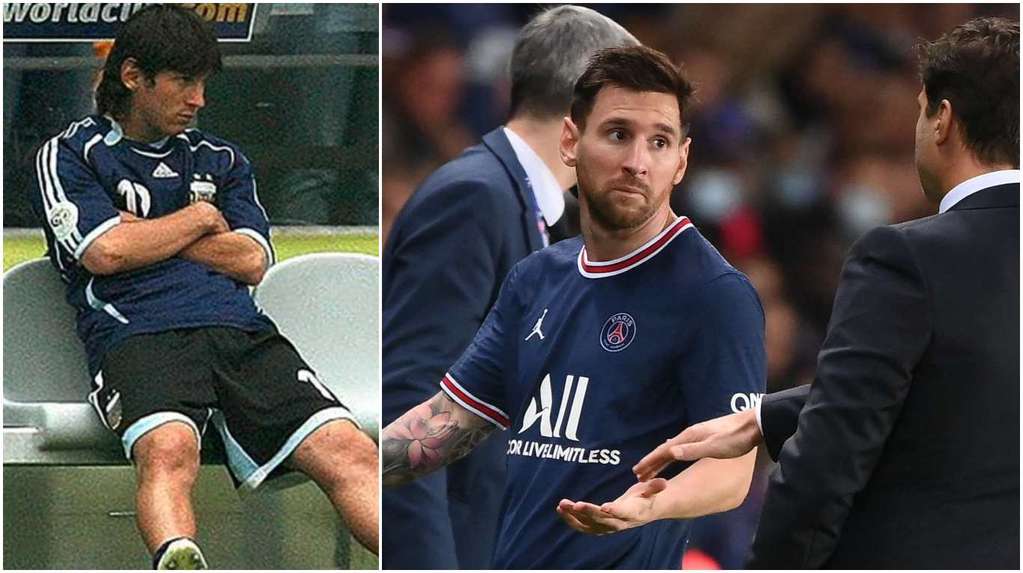 Lionel Messi always wants to play: from Pekerman to Pochettino, an anger that is repeated 15 years later

June 30, 2006. Lionel Messi waits to enter the World Cup quarter-final match between Argentina and Germany at the Olympic stadium in Berlin. José Pekerman has other plans: Julio Cruz enters for Hernán Crespo and Esteban Cambiasso for Juan Román Riquelme. With just 19 years of age, the little boy who promises to be a world star does not hide his annoyance sitting on the substitute bench, arms folded and with a obvious frustration for not playing.

September 19, 2021. Paris Saint Germain is drawing 1-1 with Olympique de Lyon in the Parc des Princes. Messi plays for the first time before the Parisian public and is surprised by the team that Mauricio Pochettino decides 30 minutes into the second half: he leaves for the Moroccan side Hakimi to enter. Walk slowly, answer a DT question with an unfriendly gesture and sits in the audience with a frown, showing that he does not like to leave the court. Much less when the team is not winning.

15 years passed between one episode and the other. Two absolutely different facts but united by the same logic: Messi always likes to play. Perhaps now it is better understood why Lionel Scaloni never takes it out in the Argentine National Team matches, not even when he is exhausted and plays little of the game. Time did not change that competitive appetite that Guardiola discovered in his years as Barcelona coach: “Leo should never be taken off the field, not even to be applauded”, was the advice that Pep gave to former Argentine coach Alejandro Sabella.

Messi wants to play. If he is tired, he comes into play less or tries to rest by taking short runs and quickly tapping the ball for a teammate. Leo knows how to regulate his energies and knows his physique very well, something that also explains why he has suffered very few muscle injuries in his career. He would rather finish on the court than on the substitute bench, even if the coach’s decision (as in the case of Pochettino) was to try to take care of him because he had played a full game during the week.

That Leo who was already painting to be the best footballer in the world did not understand why Pekerman chose Cruz and not him. Now, the change of Pochettino did not close him either when the game was tied and there was still a quarter of an hour to go. Although he is not controversial, his face makes it very clear what he feels every time they do not put it on or take it out.

I did not go out in Barcelona

In Barcelona they know Leo well. The coaches knew well that to get him out of a game was to buy himself a problem. For this reason, on average, the 10 would start a game of 27. The last time they had replaced him was on January 9, 2021: Barça 4 – Granada 0. Leo scored 2 goals and came out 20 minutes into the second half.

Scaloni doesn’t take it out either

The Argentine coach seems to have a premise since he took office: Messi does not always go out and play. It happened during the Copa América and also in the Qualifiers. Although the game is less important, the 10 begins and ends on the court.