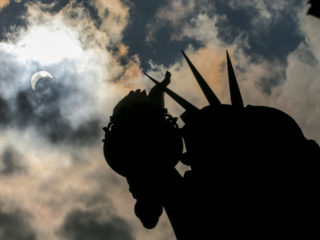 This Thursday, fans will be able to observe a solar eclipse, which will have better visibility from North America.

In some parts of Canada (especially northern Ontario), Greenland, and northeastern Russia, the so-called ‘ring of Fire’, or an annular solar eclipse, which will last up to 3 minutes and 51 seconds. In other places on the planet, the phenomenon will look like a partial solar eclipse.

Residents of the east coast of the USA, from South Carolina to the north of the Atlantic coast, will be able to observe the Sun partially eclipsed at dawn. Meanwhile, cities like Philadelphia, New York and Boston will see a sunrise dwarfed by more than 70%.

It is expected that with clear skies from New York it will be possible to observe the sunrise that looks like red devil horns, when the two ends of the Sun form a smiling face.