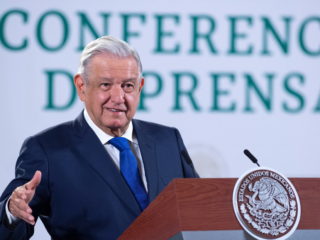 The president of Mexico, Andrés Manuel López Obrador, revealed this Monday that in the next day he will release a detailed report of the people who have benefited from the decree he signed to free thousands of prisoners who are detained irregularly, which already have advanced ages or health problems or were victims of torture.

“There are many procedures to do that we also suffer,” he said when asked during his morning conference on the result of a measure that he announced at the end of last July. as part of its human rights policy.

López Obrador assured that the head of Government of Mexico City, Claudia Sheinbaum, has already “beat” the federal authorities, since she has already released around 40 people who were detained.

“And it’s going to release even more these days.”Said the president when revealing that the report by the national government will be released on Tuesday by the Secretary of the Interior, Adán López, and the Secretary of Public Security, Rosa Icela Rodríguez.

“They are going to be here because of the decree I signed to release prisoners who remain unjustly in prison, who have not been sentenced for many years, who are sick, who have been shown to have been tortured. This is very unfortunate,” he said. .

He also explained that it has not been possible to advance in a faster way due to a bureaucratic system that is like “a crafty and rheumatic elephant” that must be pushed to walk.

For this reason, he said, he will speak with the president of the Supreme Court of Justice, Arturo Zaldívar, to see how the procedures can be streamlined.

The decree signed by the president orders the release of prisoners over 65 with chronic and degenerative diseases, over 75 who have not committed serious crimes, people who have suffered torture and those who have been detained for more than 10 years without a firm conviction.

López Obrador had ensured that the releases would be express and would be finalized no later than September 15, so tomorrow they will give a report on how much progress has been made in this regard.

According to official figures, the total prison population in Mexico amounts to 220,114 people, of which 43% do not have a firm conviction.

This means that the vast majority of 94,547 people are still locked up illegally, since they have been detained for more than two years without a sentence, which has led to overcrowding in prisons.

Of all the detainees, 87% are accused or convicted of having committed crimes of the common jurisdiction, that is, that affect individuals individually, be it theft, injuries, damage to someone else’s property, fraud, sexual crimes, fraud, homicide , abuse of authority, among others.

On the other hand, 13% of the remaining prisoners committed crimes under federal jurisdiction that affect the health, economy, assets and security of the Nation, such as carrying firearms without a license, drug trafficking and other crimes against health, damage and theft of archaeological heritage, electoral and environmental crimes, smuggling and tax fraud.