López Obrador gets stuck in Congress 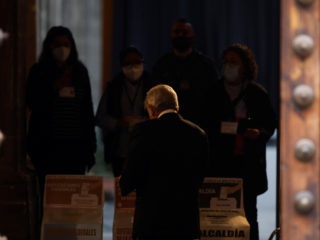 Andrés Manuel López Obrador and Morena, the party that supports his Government, maintain their primacy on the political board of Mexico, but they get stuck in the Chamber of Deputies. The results of the rapid scrutiny of the intermediate elections this Sunday, released by the National Electoral Institute (INE) at eleven o’clock at night, reflect a fall of the official bloc, which goes from 313 seats to 279, maintaining in any case a comfortable absolute majority. At the same time, the opposition alliance made up of the PRI, the PAN and the PRD is recovering and increasing its assets from 136 seats to 197 after the disaster of 2018 and years of dismantling. According to these data, Morena consolidates itself as the country’s leading force, snatches Colima from the PRI after 92 years and, in the absence of results in most of the 15 states in dispute, is on the way to expanding its territorial power.

López Obrador’s party had so far 256 of the 500 deputies. However, most of those seats were obtained in the process of forming the Chamber in 2018 after the transfer of its allies, the Green Party, the Labor Party and the PES. The latter is about to disappear, but the alliances will allow him to maintain the baton of the legislative agenda. Even so, the president’s ambition to achieve a qualified majority, set at 334 seats, two-thirds of the total, a necessary threshold to undertake constitutional reforms, remains far from being fulfilled.

The self-styled fourth transformation of López Obrador will extend his power in the territory, although the data confirm his failure in Nuevo León, one of his main bets. In the State, the industrial and economic heart of the country, the northern regionalist sentiment embodied by Samuel García prevailed. The young politician of the Citizen Movement is about to prevail over the traditional apparatus of the PRI and Morena, whose candidate, Clara Luz Flores, collapsed after meeting, in March, the meeting held by the leader of a sect sentenced to 120 years in USA. However, the hopes of the Orange Force to gain weight in Parliament are also frustrated. The quick count attributes 24 deputies to him, one less than in 2018.

The federal and local elections, the largest call in the history of Mexico, have accounted for the erosion of the president’s party, which has not yet reached the halfway point of the six-year term. The correlation of forces limits his room for maneuver in Congress. To promote their political project without hindrance and to be able to approve constitutional reforms, López Obrador and Morena would have had to have the support of at least two-thirds of the lower house. That is the spring that it needs, for example, to unblock its energy plan, which after the parliamentary process was paralyzed by justice.

The final results will calibrate the projection of López Obrador, an omnipresent figure on the Mexican political map in the face of the decomposition of the traditional opposition that precipitated after his victory in the 2018 elections. The composition of the Congress, the projection of the ruling party and the cast The territorial power will also set the starting box for the next presidential elections of 2024, which are already concentrating all eyes on a country where there is no re-election.

Participation, as anticipated by the INE, has been around 52%, a figure that is more than significant for an intermediate election. In 2015, for example, it touched 48%. Councilor Ciro Murayama has highlighted that this is the highest percentage so far this century. More than 93 million Mexicans were called to the polls under the shadow of the violence that has convulsed the long electoral campaign, the bloodiest in history, with around 800 cases of shootings, kidnappings and 36 murders. The last, hours before the opening of the schools. The episodes of violence and threats from criminal organizations and cartels, which have particularly hit local candidates from rural areas, did not stop during the vote. Shooting, burning of voting points and theft of ballots were recorded throughout the country.

López Obrador, used to setting the agenda and political debate since his daily morning press conferences, has yet to comment on the results. Yes, Mario Delgado, the national leader of Morena, has. “The majority of the people are endorsed in the Chamber of Deputies,” he said. “We also won most of the governorships,” he added when the territorial results were not yet known. “Morena is growing in our country.” The party has been proclaimed the winner in 12 of the 15 states based on quick counts, preliminary data or exit polls.

If this scenario were confirmed, the formation, which already controls five territorial governments and that of Mexico City, would add 16 states – in the case of Baja California, it would repeat – half of the country’s federative entities. Meanwhile, Congress and the traditional opposition parties have shown that they still have the ability to react. The same, the capital, where the critical forces with López Obrador have prevailed in four decisive mayoralties: Miguel Hidalgo, Álvaro Obregon, Cuauhtémoc and Azcapotzalco. On the other hand, it manages to stay in Iztapalapa, the most populated territorial demarcation in Mexico.

With these premises, this Monday the countdown to the 2024 electoral race will begin. Although it is a long-term battle, all eyes are already focused on the second part of López Obrador’s term, on the disputes for the succession of the president and in the plans of the opposition, which despite having increased its presence in Congress lacks strong leadership. But the calm reading of the results will have an impact above all on the internal debate in the ranks of Morena, where the Head of Government of Mexico City, Claudia Sheinbaum, and the Secretary of Foreign Relations, Marcelo Ebrard, are emerging as favorites to collect the witness as candidates.