Luis Enrique: «We are going to wait for Busquets, he will be on the list» 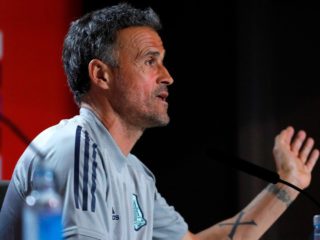 Luis Enrique attended to journalists telematically from the Las Rozas Football City. The Spanish coach reviewed the situation of the Spanish team after knowing the positives for coronavirus from Sergio Busquets and Diego Llorente. The national team has already been vaccinated with the first dose of Pfizer.

Before starting the press conference, Luis Enrique wanted to explain how the Spanish team is doing: “It is the eleventh day of concentration and I am going to try to explain how we are doing. In the beginning we have complied with all the established protocols, a little stricter than those imposed by UEFA. We started with a perfect coexistence and preparing everything with great enthusiasm. From Sunday everything changes when the first positive appears, something that takes us by surprise ”.

“When you are in a bubble, you respect all the protocols and a positive appears, everything falls apart a bit. The medical services take measures on what to do, the positive goes away and we begin to make a more demanding protocol. We train individually, with complexity, but the attitude of the players is worthy of praise ”, he adds.

“We were not going to be an exception. Being in a bubble has very good things when the virus does not enter, but when it enters it is difficult to manage. The second case could be a false positive. As a coach we have adapted to a situation that we have never faced, such as having a plan b in which players have joined. I would like to commend Luis de La Fuente and Francis, U21 Sporting Director, for bringing together players to play against Lithuania and some against us. I also called six footballers, some calls that were not easy, but they were all prepared to do a PCR and join the national team ”, continues the Asturian.

“Today we are training with both plans, which makes me very optimistic. When a situation like this happens, you begin to appreciate many situations. The most important thing is that no one else gets infected by a sports and health issue. We are trying to control that uncertainty and I think that very few times I have had such a great communion between staff and players. I only remember something similar in Barcelona B. If I have always been optimistic after each game, after seeing how we are adapting to all this, I can only think that very beautiful things await us ”, he explains.

Finally, Luis Enrique spoke about vaccination: “I would like to clarify that the president has been trying to vaccinate the national team for two months and get them to be vaccinated with the full schedule. That could not be achieved, but we accepted it willingly and did not complain about anything. I hope and wish that there are no more cases ”.

“I don’t want to wait for him, we will wait for him. He plays with an advantage. It will be on the list. “

Reaction to the vaccine

“As a coach it is something we consider. If an agreement is reached, we want you to be vaccinated as soon as possible. It would annoy me a lot not to be able to count on a player due to a reaction to that vaccine ”.

“Sergio Ramos continues in the same circumstances that made him not be on the list. When I called the six players there was a total guarantee that there would be no repercussion if they couldn’t come. But it has been very easy ”.

“The friendly against Portugal was on Friday and we did not know anything about any case. We trust the doctors. The virus is uncontrollable. Once all the protocols have been respected, we look for solutions and try to be as honest and optimistic as possible ”.

“He is perfect, he is asymptomatic. He has been able to train and is in contact with the players. Let’s hope that everything is a scare ”.

“For that we have a psychologist. What they generate by training is a show. There is a great atmosphere. That is not a guarantee of anything, but it gives positive feelings. They are all fine, although with the normal uncertainty. They are used to it because they have been passing tests for a year and a half. We are going to try to control what we can control ”.

“On a personal level it is not pleasant. We do the PCR first thing in the morning so that they can arrive as soon as possible. We play to be prepared against adversity. It is a complicated situation, but I have experienced worse ”.

“I would have summoned 23 and not 24. Since the more people there are, the easier it is to infect. I would not have changed my plan.

“We have not seen videos because we should not be in closed rooms. We have done four training sessions. First with the parallel bubble and then in the afternoon with the rest in three groups. We also seek to adapt to the heat of Seville. After the negative tests we do two groups. Yesterday we worked on the board without video offensive throw-ins, corner kicks and kick-off. The ideal conditions are not these, but it will not serve as an excuse ”.

“The head is vital. It is the most important thing. Then to compete professionally, you need a physique. We ask the players if they look more comfortable shooting penalties or not. In our case they have preferred to recreate the batches, although it is impossible to reach the same tension. Before this situation we trained everything ”.

“When you are in a protocol like the one we did, reinforced with respect to that of UEFA and the Ministry, seven days pass and the positive arrives, because it catches us by surprise. Later, many things can be criticized to us, but we have taken quick decisions and we have reinforced the protocols ”.

“I believe that the role that we should have is the one that we have. We accept any decision. We are not concerned with that. What depends on us we give it to the maximum ”.

“Without a doubt. We are not the favorites, he is the champion and we are in a European Championship, but we are among the six or seven favorites. And after watching the game against Portugal more confident ”.

“I have nothing negative to say about any player. Being a coach means making these decisions. I know Brais well. It has been international and has had a great second part of the season ”.

How it has affected you

“For me this is child’s play compared to something I have had to experience.”

Back to group work

“We try not to bring together those who play in the same position. We do two groups of 10. We depend on the doctors, we would have to wait another day or two, hope that they are negative and go back to training as a group. It will be a beautiful moment. We will arrive in optimal conditions ”.

“All those who are in the preliminary list are players of the highest level. We are prepared for any adversity. I summon the best to be part of the Selection. The facts are what they prove ”.

“It is in the hands of the president. I wish it had been done at the right time. To this day it is not official that he is going to be vaccinated tomorrow or the day after, that the past will not be due to the adverse aspects ”.

Difficult to choose an eleven

“I have no doubt, although I don’t know which eleven is going to play. Of the 23 that there are, anyone can be a starter. And those who train in the morning too. I have no problem stating it. When we all go to one we are better ”.

Ready for all this

“Before the rally, no. I thought that with the measures we were going to take the virus was not going to enter. We have made decisions. Now we have a plan b that we hope not to carry out ”.

“The coaches try to manage our players so that they arrive in the best conditions and empower them. What really makes me think that we are ready is the intensity that occurs in games and training sessions. As a coach I can only say that they stay the same ”.

“What it contributes has been seen in the last 10 or 12 years. Every time the ball passes through him the play is improved. Then, we must add that he is the captain of the National Team and one of the leaders of this team. From here on we will treat each situation individually ”.

“Indifference is one of the best weapons.”

Fear of the players

“Not just me, all the members. We have not been afraid, but we have been uncertain about how unfair it is for a player who has spent a whole season making merits to play a European. We try to contribute things that make them feel safe ”.

“It’s very nice. With some he already knew. Adaptation is very easy in this group. We all respect the few rules that we set ”.

Postponement of the match

“What we know is that UEFA allows changes until the last day in case of coronavirus. I hope there are no more cases in any selection. I hope you can see a good show. People want to go to the stadiums, to see the National Team and to go back to normality ”.

“Adama is already incorporated into the group, Laporte was tired and Robert Sánchez are in perfect condition. The ones we have called are due to coronavirus and injury ”.