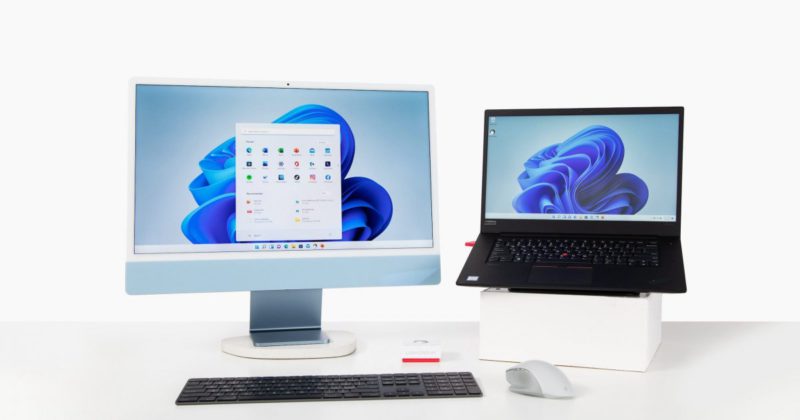 The manufacturer Astropad has expanded the functionality of the dongle Luna Display: Instead of just supporting iPads as a second screen, Macs can now also be used as an additional monitor. This works on other Macs as the main device as well as on Windows PCs with the new PC-to-Mac mode, as the manufacturer announced. The connection can be wireless or wired via Ethernet. The update to version 5.1 also brings support for 4K and 5K screens, so that an older 4K or 5K iMac can be used as a high-resolution second display.

To connect 4K and 5K screens, the USB-C version of Luna Display is required, as well as at least macOS 11 Big Sur on the Mac side. With a 4K resolution of the second screen, a refresh rate of 60 Hertz is possible, explains the manufacturer. When using a 5K iMac in full resolution as a second display, however, it becomes more sluggish: On a Windows PC, the refresh rate of the second monitor drops to 30 Hertz, on the Mac Astropad still promises 45 Hertz. So users have to be prepared for the fact that scrolling or moving windows is impaired.

The other new features of version 5.1 include support for Apple’s Magic Keyboard on the iPad. In addition, iPads can now also be used as teleprompters in conjunction with Windows PCs. Office mode for PCs requires a manual connection to the second monitor – to prevent the otherwise automatic connection to other computers in the same network.

iPad integrated as a second monitor from Apple

Luna Display is a small dongle that the manufacturer sells for $ 130. It informs the computer’s graphics chip that an additional display is connected – the connection is then made using the software supplied via WLAN or cable. Luna Display was originally just designed to turn iPads into a second screen for Macs. It is precisely this function that Apple has integrated into the operating system as a free function since macOS 10.15 and iPadOS 13 under the name “Sidecar”. Since then, Astropad has focused on cross-platform uses.