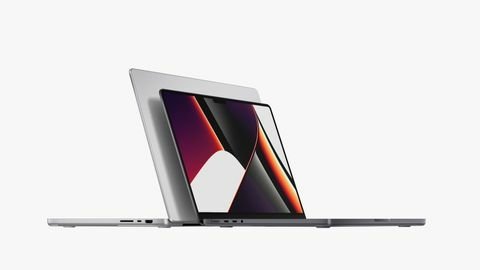 As expected, Apple presented new MacBook Pros on Monday. The professional laptops are equipped with the new ARM processors M1 Pro or M1 Max. In contrast to the first Apple Silicon M1, the new SoCs (System on Chip) have 10 instead of 8 CPU units, whereby the number of high-performance cores has increased from four to eight. As a result, there are only two instead of four high-efficiency cores that are particularly good at saving energy.

Since the panels reach very far to the edge of the case lid, there was no more space to mount the webcam and the ambient light sensor above the display – at least not as long as it remained smoothly rectangular. And so, in addition to the iPhone X and its successors, the MacBooks now have an indentation on the top of the screen. Despite this notch, Apple’s latest notebooks do not have Face ID for facial recognition.

Since 2016, MacBooks have only had the universal USB-C ports that can be used for charging, data transfer via USB, monitor signals via the DisplayPort standard and Thunderbolt 3. However, some users still lacked conventional interfaces for which adapters do not have to be carried. So now some of it is back: HDMI and an SD card slot. Thunderbolt 3 became Thunderbolt 4, but it is not faster. With USB-C, the magnetically adhering charging plug, which comes off easily when pulled, also had to say goodbye to the MacBooks. Now MagSafe is back.

The new ARM processors M1 Pro and Max have 16 and 32 graphics cores, respectively, while the M1 had seven or eight. So far, the GPU in the Apple Silicon could supply a maximum of two external monitors, now, according to Apple, there should be four. This means that you can operate two external displays in addition to the internal one. The new MacBook Pros have up to 64 instead of a meager 16 MB of RAM.

In the more expensive MacBooks, Apple used its proprietary Touch Bar instead of function keys. The touch-sensitive display strip can offer different functions depending on the program and context and make it easier to assign them using colored buttons. But neither developers nor users could really warm up to it. Now Apple is returning to F-keys. The Touch ID fingerprint sensor, however, is retained. It sits in the power button and is used, for example, to unlock after waking up.

This message will be revised further in the course of the evening as new details come to light.