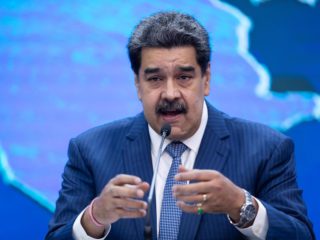 Caracas, Sep 13 (EFE) .- The president of Venezuela, Nicolás Maduro, appointed the former governor of Aragua state Rodolfo Marco Torres as the new Minister of Water Attention, a service that the president seeks to “strengthen” and guarantee, after years of complaints for shortages, cuts and constant failures in the country.

“I appointed Rodolfo Marco Torres as the new Minister of Popular Power for Water Care. The task is to strengthen the care and preservation of this important natural resource, guaranteeing the access of the Venezuelan people to this vital liquid,” said the president in his twitter account.

On August 27, Torres, who replaces Evelyn Vásquez at the head of the State portfolio, resigned as governor after losing in the primaries of the United Socialist Party of Venezuela (PSUV) where he tried to win for reelection in said post.

Complaints for failures in the drinking water supply have increased in recent years, but the executive vice president, Delcy Rodríguez, assured on Saturday that due to the sanctions imposed by the United States, the European Union and other countries, companies abroad they refuse to sell parts or spare parts for the pumping system to the Government.

“We have shown and we will continue to show each proof of how the criminal blockade has prevented Venezuela from accessing the water pumps. In writing they say: ‘we cannot supply parts for the electrical mechanism of the water pumping system due to the sanctions. of the OFAC ‘”, expressed Rodríguez in a tour of the Petare neighborhood, Miranda, broadcast by the state channel VTV.

The Venezuelan opposition denounced on June 15, that more than 90% of Venezuelans do not receive drinking water continuously and that, for more than 20 years, little has been invested to create new water sources or to adapt the facilities of purification.

“Unfortunately, the problem of drinking water service in Venezuela continues to gain ground and is exacerbated by the risk that Venezuelans have in the face of the global pandemic of covid-19,” said former opposition deputy Nora Bracho in a statement.

In this sense, he stressed that water “is a human right and the country is far” from guaranteeing it, despite the fact that it is “an essential element to make other prerogatives such as health and food effective.”

The scarce supply of water, both in the cities and in the rural areas, forces many Venezuelans to go to springs to obtain it and thus meet their daily needs for hygiene, health and nutrition.