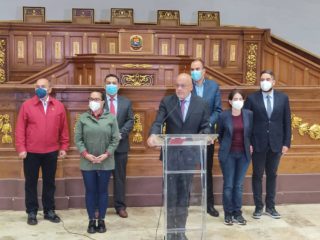 The Government of Venezuela has decided to integrate the Colombian businessman Alex Saab, alleged front man and economic operator of the Government of Nicolás Maduro, in the dialogue table with the opposition that is taking place in Mexico, Jorge Rodríguez, head of the Venezuelan delegation, reported on Tuesday and president of the National Assembly. Saab is required by the United States justice for alleged money laundering. “We are going to immediately inform the facilitators of the Government of Norway and the accompanying countries and the opposition delegation of this decision of the Bolivarian Government,” Rodríguez reported from the headquarters of the Assembly in Caracas.

The Venezuelan official has affirmed that Saab will also be incorporated as a full delegate to the social table that was approved in the agreement signed in Mexico on Monday. Saab was arrested in Cape Verde in June of last year and since then Chavismo has demanded his freedom. The Constitutional Court of Cape Verde decided on August 13 the extradition of the businessman to the United States. Saab, however, filed a final appeal in which it alleged that its extradition process was initiated “by applying unconstitutional rules.” Since his arrest, a maze of judicial resources has run through the case of the one who until then was in the shadows as the contractor most favored by the Venezuelan government, involved in food, oil, coal, construction and mining import businesses.

The capture of Saab put Chavismo on the ropes, which immediately undertook an intense campaign in his defense and to clean up his image, to the point of designating him as a special envoy of the Government to manage food and fuel and then promoting him, even while in jail. Ambassador of Venezuela to the African Union.

“He is kidnapped in a prison abroad, violating all the international regulations of the Geneva agreement, human rights and the right to free trial,” Rodríguez has alleged. “The punishment to which he has been subjected was perpetrated for having been, precisely, fulfilling functions such as the ones we are talking about at the moment at the negotiation table in Mexico. He was fulfilling functions to obtain medicines, food for the people of Venezuela in the midst of the fiercest blockade that the history of our country has known, ”Rodríguez added.