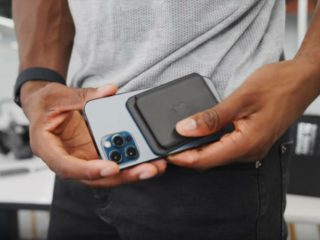 Apple is adding a tracking function to its not entirely undisputed credit card case for iPhone 12, 12 Pro, 13 and 13 Pro. The “iPhone Leather Wallet with MagSafe”, which the company has been offering since last year, will in future be integrated into the Group’s “Where is?” Network. The matching app, which is part of iOS, can now register when the three credit card case is detached from the device and records the location. So you should then be able to return to this location in order to find your plastic money again.

The new function is urgently needed – at least that’s what owners of the credit card case, which is available from 65 euros, say. It is surprisingly easy to separate from the magnetic back of an iPhone during certain treatment – especially when the latter is in a case. Inserting it into a trouser pocket is particularly problematic, in which case you should actually notice a loss.

Apple has not yet given any details on how the new tracking function will be implemented technically, for example whether there is new hardware in the “iPhone leather wallet with MagSafe”. It is clear, however, that the feature does not work with the old version of the credit card case. Self-tracking of the case is not provided, so there is no slimmed-down version of an AirTag in the leather case. Apple shares in the product description only with the fact that the “Clear Case with MagSafe”, the clear plastic cover, does not support the new tracking – why this is the case remains open. iOS 15 should in future also enable disconnection warnings for hardware in the “Where is?” network, which would be very practical for the credit card case.

Apple now sells its credit card case in a total of five colors – which shows that the hardware is apparently being popular with customers despite its inherent problems. The current colors are “golden brown”, “dark cherry”, “black green”, “midnight” and “wisteria”, a shade of purple. Shipment will start on September 23, one day before the iPhone 13 and 13 Pro go on sale.