Home
News
Marcelo Gallardo announced that he will continue in River one more year: “I choose to continue being”

Marcelo Gallardo announced that he will continue in River one more year: “I choose to continue being” 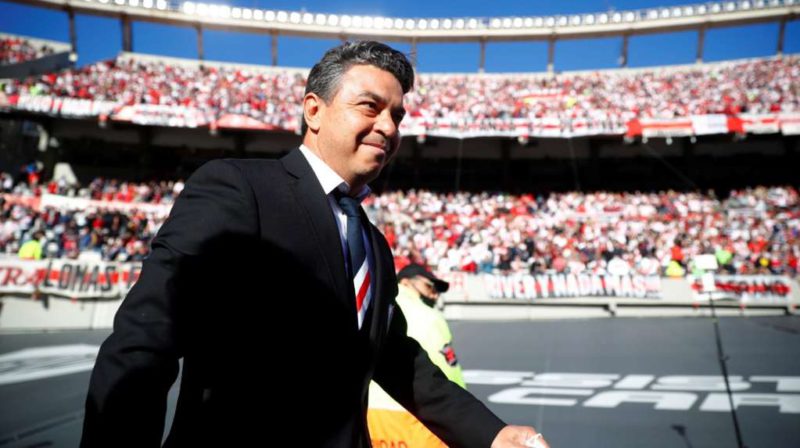 Marcelo Gallardo announced that he will continue as River manager. He did it in a press conference that was communicated in a surprising way, around noon this Friday, and that was held in Ezeiza, where in the morning the Doll met with Rodolfo D’Onofrio, the outgoing president but still in functions, and with his representative, Juan Berros.

Gallardo will continue in River for one more year, until December 2020, And so the Millionaire fans will have tomorrow the party of 12/9, the third anniversary of the triumph against Boca in the final of the Copa Libertadores, for which a massive caravan and a full Monumental stadium were expected, which now with this news could be crowded.

Already around 13, both the players of the first team, such as the members of their coaching staff, the collaborators and the leaders were finding out of the most anticipated confirmation: the permanence of the most winning coach in the club’s history.

All the statements of Marcelo Gallardo

– “After a few days of reflection that was difficult because in general I couldn’t cut it, either, the day-to-day dynamics lead you not to be able to isolate yourself, but it has to do with something I felt. I had pronounced a few weeks ago that I was going to evaluate, that I needed to reach the end of my contract after seven and a half years and it was essential for me to know, or at least take some time to reflect, because I can assure you that after so many years In a place like this, of what it demands, of how one commits oneself according to what one feels, I needed to reflect, I reached that point, and say what I was going to do, well, I choose to continue being, I deserve to continue being and after Colón to take a few days to recharge, just last night I meditated on it and this morning I first communicated it to Enzo Francescoli, Jorge Brito, I communicated it to the squad and the coaching staff ”.

– “I did not want more time to pass, I had already reflected on it last night and today I needed to communicate it so as not to continue generating expectations.”

– ”One cannot conform to everyone nor do I like to generate expectations. He did not want people to be uncertain or for people to go through that moment of anguish. I want to return affection and love to the fan, which is what they offer me, renewing my energy and continuing to lead this sporting management, which is what really makes me happy ”.

Numbers and highlights of Marcelo Gallardo in River

Assumed on June 6, 2014. He came to succeed Ramón Díaz. It takes seven years, six months and two days of management.

Since then, he has managed 369 meetings and achieved 196 wins.

Marcelo Gallardo’s game breakdown in River: he directed 194 games for the local tournament, of which he won 99, tied 53 and lost 42. During the Professional League Tournament he reached an undefeated 18 dates. He did not lose from the 5th date against Godoy Cruz until the 23rd with Rosario Central.

Regarding the national and international cups, the Doll He has led 174 games, of which he won 96, drew 47 and lost 31.

The 13 titles that Marcelo Gallardo won at River

Professional Football League 2021 You will have the possibility of adding a new title, the 14th,

if it is that December 18 surpasses Columbus

in a unique match for the Champions Trophy.