Thanos is one of the most powerful beings in the Marvel universe and killing him is almost impossible. Not because the Mad Titan cannot be defeated in battle, but because he is not allowed to die. The most recent installment of Eternals explains that Thanos is immortal and it is all because Death does not allow the character to enter his kingdom.

Thanos and Death have not gotten along since the Mad Titan wiped out half of life in the universe with the Infinity Stones in the Marvel comics. Death never felt sympathy for Thanos, even scorning him by casting him out of the underworld in Cosmic Powers # 1.

If Death does not want you with it, it is impossible to die according to the Marvel Universe. To this is added all the powers of Thanos for being an Eternal, such as immunity to all diseases and aging.

In Eternals # 2, Ikaris and Thanos battle for space and time on Titanos, the ancestral home of the Eternals. The Eternals defeated Thanos, an Eternal born with the Deviant gene that gave him his monstrous appearance, and they despised him even more thanks after snapping with the Infinity Stones. 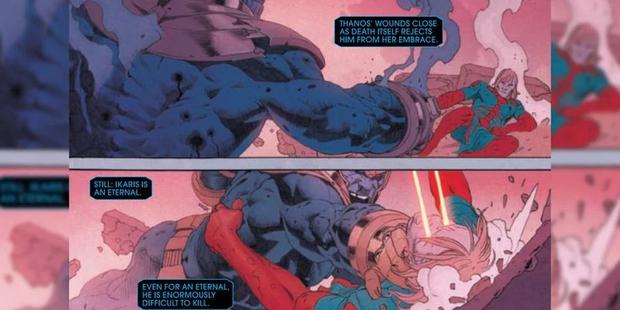 After Ikaris considerably injures Thanos, Marvel’s Mad Titan does not appear to have suffered as much damage, as his wounds heal when “death itself rejects him from its embrace.”

Thanos has died several times in the Marvel comics, but he always returns to continue causing destruction in the universe. You’d think it’s about his curse and also a clue as to how the MCU might come back to call on this character after Avengers: Endgame.