MARVEL Conan Library Review What If? Conan the barbarian. When you go … I come from there 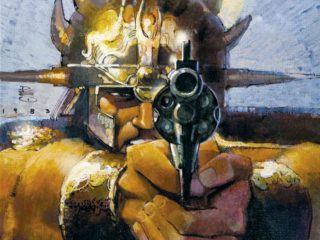 Within the first two volumes of the What If? … collection, the character of Conan, created by Robert E. Howard, featured four issues in which he starred, either alone or accompanying other heroes of the publishing house. Panini Comics gathers these episodes into one hardcover volume for the enjoyment of fans of the character.

There is a section within the Marvel iconography that is responsible for visualizing what would have happened if at some point in history a small detail had been altered and therefore a different story was created. Here we can discuss the creation of new timelines or only the imagination of Uatu, who in his work as El Vigilante fabutes with the variety of existing possibilities and the parallel events that this could entail. Because in those first What If? the only constant is the presence of the alien who, from his home on Earth’s Moon, presents what is going to happen.

The scriptwriters always started from previous events in the Marvel canon to from a certain point give an important turn to the final result of the story previously narrated. There were exceptions, as in this volume we can see as it is a sequel to a What If? previous, but normally everything was well documented as soon as the narration began. These were proposals that aroused the interest of the reader, hence the success they achieved and that we still, from time to time, attend the publication of some new What If?

My visits to the future

Regarding this volume we find two types of proposals, those that position Conan the Cimmerian in a current era or those that make characters like Thor or Wolverine end up visiting the Ere Hyboria. In the first type we have two stories, perhaps the most interesting and relevant for the reader, in which Conan lives his adventures in 20th century society, in a New York with high towers that will allow him to face common criminals while he aspires to go back to his own time.

Roy Thomas and John Buscema, the regular authors of Conan in the seventies, teach us an unknown side of the character as they make him wander under the wise guidance of Danette, a taxi driver (based on Dann Thomas, who would be Roy’s wife soon after and collaborator on multiple occasions). For its continuation, just five years later, Peter B. Gillis and Bob Hall continue the story by varying a small detail, which causes Conan to remain in the present. They will coincide with Captain America but without reaching the levels of excellence of the first part.

Those who allowed themselves to pass through the Hyboria Era

Within the second assumption that we have raised, Thor, in one of the last issues of volume 1 of the original collection, and Wolverine, already in the second volume in the nineties, shared adventures with the barbarian, but being the superheroes who traveled to the Hyboria Era to find a world dominated by sword and witchcraft. The God of Thunder reaches the world of Conan in a failed chase after his stepbrother Loki. Alan Zelenetz and Ron Wilson make Thor a companion on the Cimmerian’s ramblings, before placing the Norse god before Crom or battling Thoth-Amon.

For the final installment, Glenn Herdling and Gary Kwapisz, take advantage of Logan’s visit to the Watcher’s fortress during the final combat of the Dark Phoenix Saga, to send him to the Hyboria Era. There he will mistake Red Sonja for Jean Gray and clash with Conan multiple times, picking up on an argument after the death of Belit, the Pirate Queen of the Black Coast. Perhaps the weakest chapter of the four and in which Conan is worse off by comparison. We were in a time when Wolverine was the undisputed king of publishing.

The content grouped here presents different readings in terms of quality, being able to affirm that there are two stories that stand out and two more from the heap. Conan fans have already enjoyed the release of issue # 13 of the first volume of What If? on different recent occasions, so truly the acquisition of this volume from the Conan Library is more focused on those who want to have everything there is of the character. Otherwise we are dealing with rather expendable material.

Conan Library. What If? Conan the barbarian

Description : All the What If? Conan the Barbarian classics in one volume! From the mythical “What would happen if Conan walked the Earth today?” until its sequel, as well as the thunderous battle against The Mighty Thor and the historic first encounter of axes and claws, in front of Wolverine.