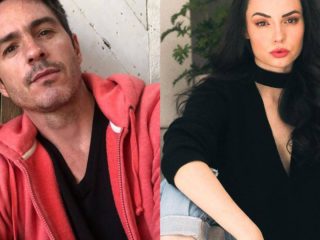 Mauricio Ochmann made reference to rumors that he had started his relationship with Paulina when he was still with Aislinn Derbez.

Undoubtedly, the relationship between Mauricio Ochmann and Paulina Burrola is so special for the actor, that since he confirmed their romance he has not hidden his feelings towards the former Sonoran beauty queen, nor allowed to be defamed.

Shortly after revealing that he was in a new relationship, a year after his divorce with Aislinn Derbez, several fans of the former couple were quick to criticize the situation.

Some went further when analyzing Mauricio and Paulina’s activity on Instagram, suggesting that they started flirting when the actor was still with the host of The magic of chaos.

The actor came out to defend his girlfriend and to deny these theories.

Thus, with the distance as one more proof of their relationship, Mauricio shared how much he misses his girlfriend from Spain, where he is filming a movie next to Maite Perroni, and how much he loves her.

According to the actor, the last almost six months of his life have been very special thanks to Paulina Burrola.

Mauricio described the model and driver as being so special that neither she nor her relationship deserves to be the target of speculation, defamation, or “merciless and unscrupulous attacks …”.