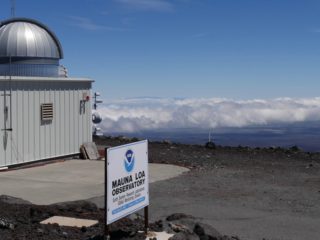 Scientists from the U.S. Office of National Oceanic and Atmospheric Administration (NOAA) and the Scripps Institute of Oceanography at the University of California, San Diego they announced that atmospheric carbon dioxide recorded by the Mauna Loa atmospheric observatory, located in Hawaii, reached its highest level in May since measurements began 63 years ago.

According to the registry, the monthly average of CO2 last month was 419 parts per million (ppm). By comparison, the monthly average for May 2020 was 417 ppm. The data worries scientists, since it does not reflect the decrease that the pandemic was expected to produce in CO2 emissions, which is the main responsible for the greenhouse effect generated by human activity.

“We are adding to the atmosphere some 40.000 million metric tons of CO2 pollution a year, “lamented Pieter Tans, principal scientist at NOAA’s Global Monitoring Laboratory.” It is a mountain of carbon that we extract from the earth, burn and release into the atmosphere in the form of CO2, year after year. If we want to avoid catastrophic climate change, the top priority must be to reduce CO2 pollution to zero as soon as possible, “he added.

The CO2 measurement system, known as the Keeling curve, was named in honor of the scientist Charles David Keeling, who was the first to observe the existence of an increase and decrease in CO2 levels closely related to the seasons of the year. . Thus, during the seasons when plants grow, they remove large amounts of CO2 from the atmosphere. Meanwhile, during the fall, winter and early spring, plants and soils generate CO2, causing carbon dioxide levels to rise in the northern hemisphere until May. Keeling was also the first to notice the increase in CO2 due to unnatural causes.

The researchers point out that carbon dioxide levels are comparable to those on the planet four million years ago. At that time, the sea level was about 20 meters higher than today, the average temperature was higher than in pre-industrial times and large forests stretched across the areas of the Arctic that are now tundra.

To avoid catastrophic climate change and not keep increasing CO2 levels in the atmosphere, scientists see an obvious solution ahead of us: “Solar and wind power are already cheaper than fossil fuels and run at the scales that are needed, “said Trans.