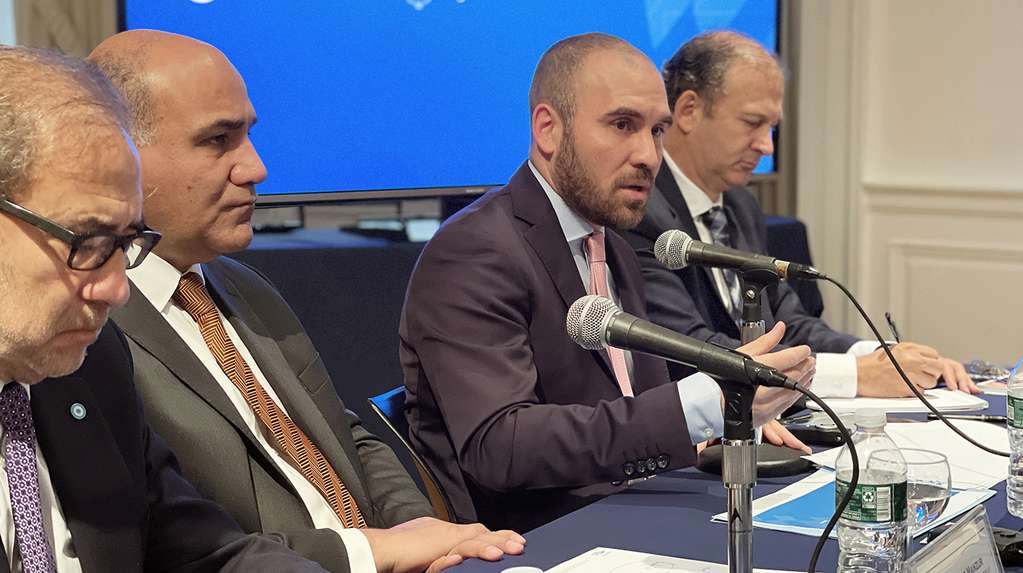 Meeting with the IMF, meeting with investors and pending discussions: the balance of Martín Guzmán and Juan Manzur’s tour of the United States

The government’s agenda not only goes through the elections but also through the debt issue. This weekend the Minister of Economy returned to the country Martin Guzman and the chief of staff Juan Manzur. Both were in the United States, where they held meetings. While the tour did not lead to big announcements, in the ruling party they can rescue some positive balances in matters of foreign support.

The head of the Palacio de Hacienda headed the official delegation, as he traveled to Washington on Saturday 9 to participate in the meetings of finance ministers and presidents of the Central Banks of the countries that make up the G20. The head of the Central Bank, Miguel Pesce, which on Thursday was already back in Buenos Aires. That same day, Manzur joined the delegation for a dialogue with investors.

On his return to the country, Manzur met this Sunday with President Alberto Fernández at Quinta de Olivos to give him details and conclusions of the meetings he had with international investors in New York.

Support for an Argentine claim

Guzmán again managed to get the G20 to support Argentina’s request for the IMF to reduce the surcharges it charges to countries that access financing that exceeds the quota they contributed. “We wait with interest keep debating in the Executive Board of the IMF ”, affirmed the final communiqué of the meeting, in what the Government considers a triumph before the international community.

A decrease in that cost is one of the main requests of Guzmán’s team in the negotiation for a new agreement. Alberto Fernandez He affirmed that the IMF could pronounce in favor of that demand that same month, when the G20 meets in Italy.

The director of the entity, Kristalina Georgieva, said that the Board of Directors has not yet made a decision on the matter and explained that some members fear that, by resigning this income, the solvency of the organization will be affected. For its part, the IMF Advisory Committee also urged the Board to reassess the surcharge policy.

Negotiation and requests to the IMF

Last Tuesday Martín Guzmán met Georgieva again, in what he described as a I find “valuable” to “advance in resolving the unsustainable debt with the agency.” For her part, the head of the IMF stated: “Very good meeting today with Martín Guzmán in Washington today. We hope to continue with our close work to address in a lasting way the challenges that Argentina faces and build a more sustainable and inclusive recovery ”.

The meeting was also attended by the director for the Southern Cone before the IMF, Sergio Chodos; the deputy director of the Western Hemisphere Department, Julie Kozack; and the head of the mission for Argentina, Luis Cubeddu. These last two officials are key to the design of a new program with the IMF.

The meetings continue although the Government is not in a hurry to close the agreement before the elections, especially considering that the new debt will have to be approved by Congress, according to a Law promoted by the Government. Rather, the understanding will most likely be announced during the first quarter of 2022, with the arrival of a mission from the multilateral organization.

Among other issues, the economic team asks the IMF:

Already with Manzur in the United States, Martín Guzmán approached New York, where both officials met with representatives of investment funds. Before that audience they assured that closing an agreement with the IMF is a priority of the Government.

“A positive deal with the IMF is a priority that involves all sectors of Argentine society, ”said the Chief of Staff. In this sense, Manzur ratified the Argentine willingness to pay the debt and stated: “This has consensus within the Front of All and we want to take it to Congress and have the support of all political sectors so that it is approved there ”.

Several of the investors who were in the auditorium had invested in Argentine bonds during the management of Mauricio Macri and they came out quickly when the currency crisis hit. Many of them were victims of the defaults on the local debt in dollars, which was restructured in 2020, and the reprofiling of securities in pesos. In the latter case, there are still foreign funds that have bonds in local currency and put pressure on the cash with liquidation to leave the country. Although their participation was significantly reduced, the Government considers that these investors drive the exchange gap.

At the end of the meeting, Guzmán referred to the distrust of those capitals towards the country. “In 2016, under the previous government, a good part of those who were present today they started to invest in Argentina, with an expectation of a path that later collapsed. This generated very strong credibility problems as a result of the previous failed economic model and there are wounds to heal“, he claimed.