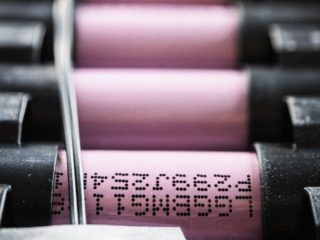 The oceans contain about 5000 times as much lithium as the continents – unfortunately only in the very low concentration of 0.2 ppm (parts per million). In addition, seawater contains sodium, magnesium, calcium and potassium cations in far higher concentrations. Researchers at the Saudi Arabian King Abdullah University of Science & Technology (KAUST) now have a developed a processTo extract lithium from seawater in an economical way.

Water from the red sea

The system consists of an electrochemical cell with a ceramic membrane made of lithium lanthanum titanium oxide (LiLaTiO4). Their crystal structure contains holes just big enough to let lithium ions through, while blocking larger ions. The positive lithium ions flow through this membrane into a chamber with phosphoric acid and a copper electrode coated with platinum and ruthenium.

Meanwhile, the negative ions from the sea water pass through a conventional membrane into another chamber with sodium chloride solution, which also contains a platinum-ruthenium electrode.

The researchers tested the system with water from the Red Sea. A voltage of 3.25 volts transported the lithium ions through the membrane. In four further process cycles, the lithium could be concentrated to 9000 ppm.

If the pH value in the collecting chamber is increased, solid lithium phosphate precipitates there in sufficient purity for battery production. “The combination of enrichment with conventional precipitation makes the process insensitive to interference from other soluble ions”, write the researchers in their paper.

According to her, the electricity costs are around five dollars per kilogram of lithium. “Although a rigorous economic analysis is still required to include additional capital and operating costs, one can assume that energy is the largest cost component of the process,” the researchers say.

Hydrogen at the cathode and chlorine gas at the anode are produced as by-products. According to KAUST, their value can more than compensate for the electricity costs. The researchers hope that the membrane itself can be produced on a large scale at manageable costs with the help of the glass industry.