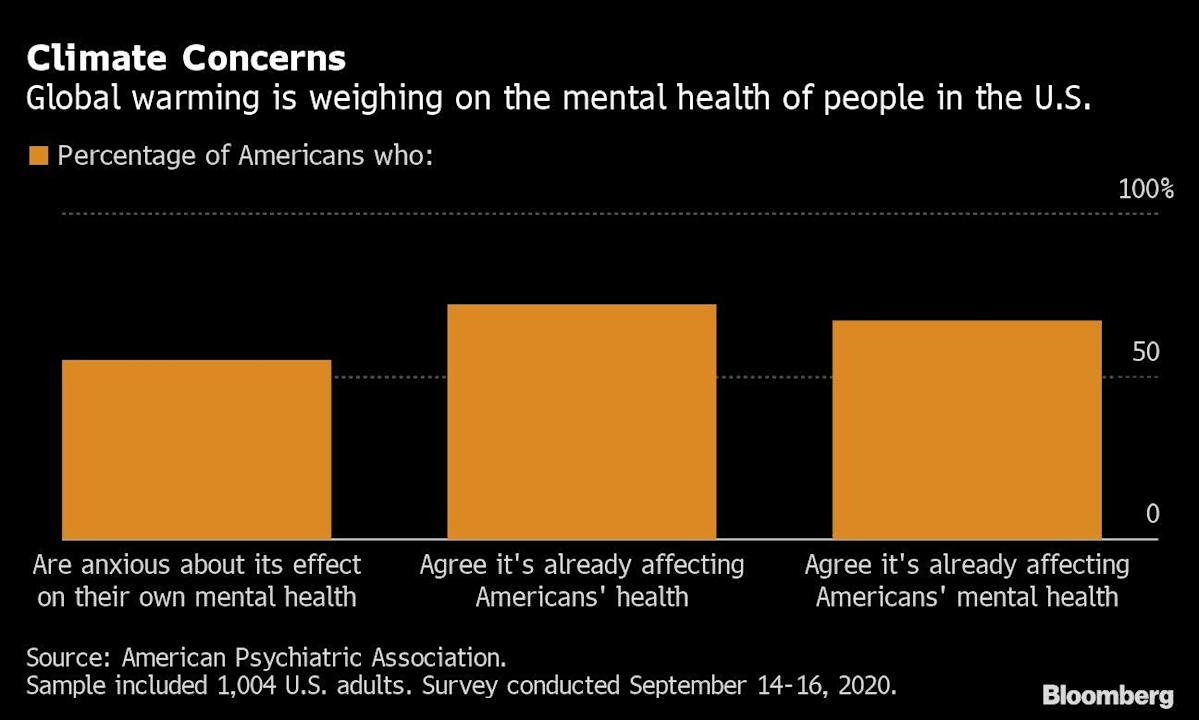 Mental Health: The Next Victim of Global Warming?

(Bloomberg) – One night in July, Stephanie Felts was lying in bed trying to process simultaneous weather disasters around the world: from a crushing heat wave in Canada to wildfires in the United States and flooding in China.

“I just realized that this is the best we will have, not because we can’t do anything to make things better, but because we just won’t,” said Felts, 43, who works in financial services and now lives nearby. from Atlanta. “That suggests that the apocalypse is beginning.”

She is not alone. More people are finding it difficult to cope with the growing sense that governments and businesses will not do enough to stop global warming. To make matters worse, there is the knowledge that even if humanity suddenly unites in a historic shift towards renewables, it is already too late to avoid irreversible consequences.

Perhaps from the depths of the Cold War has not arisen such a deep and widespread despair for the future. Whether it’s called climate anxiety, ecological pain, or anything else, deep concern about global warming is increasingly affecting the daily lives of many people. Most American adults already say they are somewhat or extremely anxious about the effect the climate crisis is having on their mental health, according to a survey by the American Psychiatric Association. That adds to the stress of trying to protect yourself against the coronavirus.

In developing countries, millions of people have been dealing with the psychological effects of global warming for years. Rising temperatures in Nigeria contribute to desertification, forcing herders from the north to move south to feed their livestock. The displacement precipitated clashes with farmers. The fear of violence over increasingly scarce resources is not unusual.

The large number of people around the world susceptible to weather-induced stress has fostered a sense of urgency among mental health professionals seeking to understand the problem. Virtually anyone “could be affected by weather anxiety, regardless of their own personal vulnerability or relative safety,” according to Susan Clayton, professor and researcher of psychology at The College of Wooster in Ohio.

Several studies found a sizable minority who say that changing weather already affects their normal functioning. Seattle councilor Andrew Bryant said people are anxious about global warming and being directly affected by a climate disaster. Janet Lewis, a New York psychiatrist, said people are struggling with dissonance from everyday activities and things that they know are harmful, like eating red meat or driving a car that uses gas.

Mental health experts emphasize that communication with friends and family remains an effective way to cope; not everyone needs a therapist. Still, only 37% of Americans say they discuss global warming on a regular basis with people close to them, according to a survey by the Yale Program on Climate Change Communication.

Nota Original:Mental Health Could Be the Next Casualty of Global Warming