Merkel wants to accelerate the expansion of the power lines, countries are putting pressure 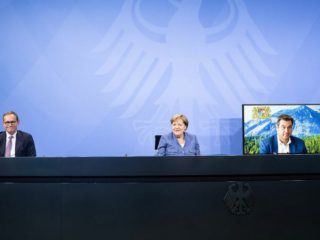 Chancellor Angela Merkel (CDU) has announced that the federal government will propose by the end of the current legislative period what will result from the new climate targets for the construction of new power lines. Then steps could be agreed very quickly in coalition negotiations – for accelerating planning or a decentralized expansion of renewable energies. In the opinion of some Prime Ministers, this is also necessary.

The line construction takes a long time and is complicated, but the prerequisite for being able to meet the demand for renewable energies, said Merkel. There are delays in the construction of power lines from wind power mainly produced in the north to the south. The expansion of wind power is not progressing fast enough either. “We are under a lot of pressure here”, said Merkel on Thursday in Berlin after consultations with the prime ministers of the federal states.

Merkel referred to the ruling of the Federal Constitutional Court, which had given politicians to become more demanding and ambitious in terms of climate protection. This is reflected in the amendment to the Climate Protection Act – the federal government wants to raise climate targets in it. The Bundestag discussed the amendment for the first time on Thursday.

Berlin’s Governing Mayor Michael Müller (SPD) said: “The line expansion must go ahead and it must go ahead faster.” By 2026, 7,700 kilometers of route expansion are planned, 1,600 kilometers are only finished, 730 kilometers approved. Brandenburg’s Prime Minister Dietmar Woidke (SPD) said according to dpa: “If it continues like this, the climate change will fail.” His Rhineland-Palatinate counterpart Malu Dreyer (SPD) warned that the expansion of renewable energies must be much faster in order to achieve the goals set.

Federal Finance Minister Olaf Scholz (SPD) also said according to the dpa: “We are lagging behind everywhere when it comes to expansion goals. It doesn’t work that way.” The expansion targets would have to be increased immediately in order to be able to achieve the climate targets for 2030. Federal Minister of Economics Peter Altmaier (CDU) pointed out that some things could have been accelerated in the expansion.

In the energy transition, from the wind industry’s point of view, the expansion of onshore wind power is not progressing fast enough. The reasons are long planning and approval procedures as well as many lawsuits on site. Germany will phase out nuclear power by the end of 2022 and will end coal-fired power generation by 2038 at the latest. For “green hydrogen” used, for example, in the steel industry or the expansion of electromobility, considerably more electricity is expected to come from renewable energies in the coming years.