Migration, economic recovery and pandemic: the urgent issues of Central America at the SICA summit 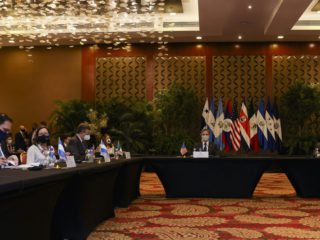 The Central American Integration System (SICA) will be in operation for 30 years and has convened a presidential summit with three thematic axes marked by the impact of the covid-19 pandemic, the migratory phenomenon and the challenges for the economic recovery of the region .

Costa Rica will host the face-to-face meeting, which will be chaired by the president of that country, Carlos Alvarado, and which is expected to be attended by his counterparts from El Salvador, Nayib Bukele; Guatemala, Alejandro Giamattei; Honduras, Juan Orlando Hernández; Dominican Republic, Luis Abinader; Panama, Laurentino Cortizo; in addition to the Prime Minister of Belize, Johnny Briceño; and the President of the Spanish Government, Pedro Sánchez.

Sánchez’s presence on this occasion has to do with the 20th anniversary of the establishment of the Cooperation Memorandum between SICA and Spain, which, according to the mechanism, has had an impact on the “consolidation of the first Tri-National Customs Union of the entire American continent. “, favoring intraregional trade and strengthening the mechanism of the Joint Negotiation of the Council of Ministers of Health of Central America and the Dominican Republic (COMISCA),” leading to savings of more than 72 million dollars in the purchase of medicines and medical supplies at regional level”.

The Costa Rican Foreign Ministry has advanced that another of the key issues is the modernization of the integration mechanism to face regional challenges and eliminate bureaucratic obstacles to cooperation, at a time when the Central American region faces the migratory challenge, aggravated by the consequences. economic, political and social consequences of the covid-19 pandemic.

The migration issue at the center

The SICA summit will take place days after the visit made by the US Vice President, Kamala Harris, to Guatemala and Mexico, to exercise her efforts as commissioner on migration issues, and the previous meeting with the US Secretary of State. , Antony Blinken, with members of the bloc earlier this month.

The brake on Central American migration is one of the key issues for the United States, so Washington has made representations not only with the SICA member states but also with Mexico (which participates as a regional observer of the mechanism), with the aim of to press for them to prevent the flow of people without papers to the United States. “Do not come”, was Harris’s categorical refusal this week in Guatemala for those who wish to undertake the trip.

The problem is that the systemic crisis in Central America, which is pushing thousands of people to flee their countries in search of opportunities, has been aggravated by the weight of the pandemic. According to recent estimates, exports have fallen above average, the prospects for recovery are not positive and remittances reported a decline of almost 20% in 2020, nothing less than a figure for a region that depends on between 13% and the 20% of their GDP from the cash transfers made by migrants outside their countries to support their families.

“One of the issues on the regional agenda of the member countries of SICA is forced displacement that impacts the communities of Central America and Mexico”, clarified the block in a statement.

On that subject, there are two perspectives that may have an impact on the countries of the region. The first, from the US, which offers financial assistance in exchange for guardianship the institutions of those countries under the argument of the “anti-corruption” struggle; the second, proposed by Mexico, which raises direct financing programs for development to discourage irregular migration of the most vulnerable people.

Meanwhile, Mexico and the United States have expanded the military presence on their borders to prevent the passage of Central American migrants. The administration of Andrés Manuel López Obrador assures that it is with a perspective of “respect for human rights” and, between January and June, the National Institute of Migration (INM) reported more than 90,000 people who could not prove their regular stay in the country , the majority from Honduras, Guatemala and El Salvador, of which almost half (42,067) have been deported. At least 20% of them were minors.

At the US border, migrant detentions continue at record levels and the arrival of unaccompanied minors exacerbates the situation. This week, Harris not only sent his harsh appeal to migrants but also warned that those who dare to undertake the journey will be deported.

The economic and health crisis

The economic and social impact of the health crisis in the region will also be at the center of the discussion among the SICA countries, which since the end of April have been facing the second wave of covid-19 and demanding greater access to vaccines.

“There will be no economic recovery if there is no vaccination“, recognized this week the Costa Rican Foreign Minister, Rodolfo Solano. Until now, according to data provided by the bloc, vaccine coverage has reached almost 6 million people.

However, last month, the secretary general of SICA, Vinicio Cerezo, warned that the number of drugs available to immunize against covid-19 barely reaches a quarter of the population in the Central American region, for which he demanded from the Pan American Health Organization (PAHO) “equitable and timely” support to access vaccines. “No country will be safe until we all are”, he pointed.

In this context, the countries of the bloc are attentive to the possible donation of vaccines that Spain has made and the offer that Blinken made, at the beginning of June, to allocate at least 80 million vaccines to the whole world, waiting for them to a percentage of these drugs reach Central America.

In addition, the discussion remains on the air about the contribution of 4 trillion dollars by the United States to the region to face regular migration, which is added to the 310 million for food security and assistance against natural disasters. . However, it is not an easy issue among some members of SICA, such as El Salvador, who have a high-tension relationship with Washington due to the White House questioning the decisions of the Nayib Bukele government.