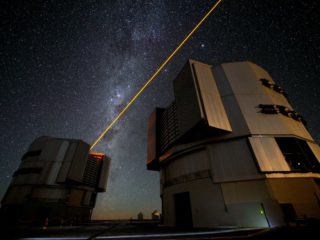 Thanks to ever better technology, innovative approaches and international cooperation, astronomy is flourishing. But while many observations help to refine or sort out theories, there are always discoveries that just don’t seem to fit. Mysterious signals, alleged violations of the laws of nature and – as yet – phenomena that cannot be explained. The public likes to discuss whether there are traces of extraterrestrial intelligence. Scientists know that there is almost always a natural explanation in the end. But the imagination is stimulated and then begs the question: What if we haven’t found any alien signals because we’re looking for the wrong ones?

What is missing: In the rapid world of technology, there is often the time to rearrange the many news and backgrounds. At the weekend we want to take it, follow the side paths away from the current, try different perspectives and make nuances audible.

Presumably, the Neanderthals were already sitting by the campfires in the Stone Age, looking at the sky with admiration, and scratching their heads. What are these stars? Are there any more worlds out there with so many delicious woolly mammoths? Much later, about 200 years ago, the great mathematician Carl Friedrich Gauß made a concrete suggestion that large areas of Siberian jungle should be felled in the shape of a triangle in order to give a sign to the inhabitants of the moon. When shipping canals like the Suez Canal and the Panama Canal were built towards the end of the 19th century, astronomers began to look for similar ones on other planets. The logic was simple: what the great human civilization produces, surely the Martians will do exactly that.

And indeed: Giovanni Schiaparelli announced the discovery of the Martian canals in 1877. Something similar happened a short time later when Guglielmo Marconi put the first radio into operation in December 1894. Just a few years later, Nikola Tesla was looking for radio waves from Mars, and believed he was actually receiving them. That turned out to be a mistake, but the search for radio signals from space continued. The “search for extraterrestrial intelligence”, SETI for short, received a boost in 1960 with two publications in the respected journal Nature. It was there for the first time that it was scientifically described in concrete terms which frequencies and limits were involved for interstellar communication with radio waves and optical light. Between 1960 and 2018, the SETI Institute recorded at least 104 experiments with radio telescopes. So far all unsuccessful, as well as searches in the optical field, for X-rays or infrared signatures.

Particle physics radically changed our view of the world in the 20th century: Only through an understanding of elementary particles were discoveries such as nuclear fission (nuclear weapons, nuclear power plants) possible. Of the 37 elementary particles known today in the standard model, several are suitable for an interstellar communication path. I have in a research paper in 2018 examines the advantages and disadvantages of all relevant particles. The well-known photons (light particles) were the “winners” because they are massless and therefore energetically cheap, they are fast with light, can be focused very well, and can carry several bits of information per particle.

We do not only know photons as light particles – they are just as present in the electromagnetic spectrum as radio waves, and with higher particle energies than X-rays or gamma rays. There are also other particles that can be used more or less sensibly for communication. For example, it was demonstrated that data can be transmitted using neutrinos. These have the advantage that they effortlessly penetrate rock that is kilometers thick. However, this is also one of their disadvantages: They are extremely difficult to detect because they also penetrate (almost) every detector.

By the way, the particle that is worst suited for communication over long distances is the Higgs boson. It was predicted by Peter Higgs in 1964, but was not observed for the first time until 2012 at the Large Hadron Collider (LHC) at CERN – there was also a Nobel Prize. The Higgs boson decays after only 10-22 Seconds. To keep it alive long enough for a trip to the next star, it would have to be accelerated very strongly. Due to the Lorentz factor, his subjective time would then pass more slowly. In practice, however, this is impossible, because you would have to pump so much energy into the Higgs particle that it would become a black hole. It thus disqualifies itself as a data provider.

To put it simply, quanta are discrete particles in a system that all have the same energy. For example, Albert Einstein postulated in 1905 that light particles (photons) always have a multiple of the smallest amount of energy. This results in the field of quantum mechanics, which describes effects on the smallest level. The transition to the macroscopic, classical world is fluid – quantum effects have also been demonstrated in fullerenes, which are spheres made of 60 carbon atoms. So although quantum effects occur in all particles, it makes sense to focus on photons for interstellar communication, because they are superior to other particles for this purpose.