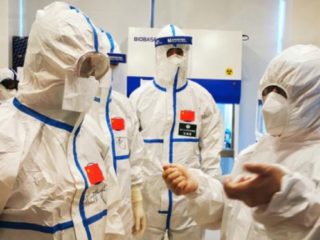 The intelligence services of half the world are collecting clues about the theory that the coronavirus came out of a chinese laboratory. Accidentally or on purpose. And Spain has joined in: the Government of Pedro Sanchez It commissioned the CNI weeks ago to conduct its own analysis of whether this hypothesis is supported, based on its own data and from other information services. The report is already underway.

There are more and more doubts about the official version of the origin of the coronavirus. The pathogen that has caused more than 3.7 million deaths all over the planet it came to humans, supposedly through an animal. However, the pathway of zoonosis – natural transmission – begins to water with the advances of the investigations that are being carried out mainly by the secret services of United States, United Kingdom, New Zealand, Australia and Canada in an intelligence community called ‘Five Eyes’ and in which Germany and France also collaborate.

Now eyes are focused on him Wuhan Institute of Virology, that laboratory of biological level 4 – the most dangerous pathogens – located just a few hundred meters from the market where the most lethal pandemic of the last century supposedly originated. A theory that has passed from the terrain of conspiracy to that of probable facts.

Moncloa does not want to be left behind by the theory of the Chinese laboratory, the one that has been gaining more force in recent months. And for this reason, as OKDIARIO has learned, the Government has commissioned the CNI to prepare a detailed report that explains to the Sánchez Executive the main findings that the allied intelligence services have reached.

The bulk of the analysis will be based on data obtained so far by other countries that have already worked on the ground and reached their own conclusions. Some of them are still secret and others have been leaked to the press. But the Spanish intelligence service has also been charged with draw your own conclusions.

Therefore, the sources consulted explain that the CNI has formed a «Technical panel» experts in virology and epidemiology, which would include several renowned Spanish professors, to evaluate the data obtained. All that information will be reflected in a final report that will be available to the Department of Homeland Security. «There is no set deadline for delivery», They assure.

It will not be, say those who know some details of that investigation, an easy task. They explain it: «Spain has very little infrastructure in ChinaThere are hardly any personnel for field work and it is a very particular place. It is not easy for Spanish intelligence to move there.

The CNI alerted from Beijing

Despite these difficulties, the Spanish intelligence service has been able to provide qualitative information from the embassy in Beijing. As revealed by OKDIARIO, the head of the CNI antenna in China, Beatriz Méndez de Vigo, sent a note to Madrid in mid-January 2020 in which he alerted that a group of doctors from the Wuhan Central Hospital, led by Dr. Ai Fen, had warned that the epidemiological situation was much more serious than the Chinese authorities admitted.

Méndez de Vigo, which was number two of the Spanish secret services between 2012 and 2017 and stationed in Beijing since June 2017, reported the high level of alarm that the virus was generating within the Chinese Government. The Spanish spy based her information on contacts with the foreign intelligence of the Ministry of State Security (MSS), the body that brings together Chinese espionage.

The notice from the embassy in China came ahead of the declaration of “Public health risk of international concern” decreed by the World Health Organization (WHO) on January 30, 2020. In other words, a couple of weeks before the world began to get scared by that Chinese epidemic, Moncloa had already received insider from Wuhan.

Sources of the secret services consulted by OKDIARIO highlighted at that time the malaise that exists in a wide sector of the CNI for the way in which the Executive had faced the coronavirus crisis: “I was warned months in advance of what was coming to us. The tragedy of 11-M was going to fall short of the soles of shoes compared to the virus.

Health goes the other way

Meanwhile, the Ministry of Health continues to consider it “extremely unlikely” that the virus came out of the Chinese laboratory. This is collected in an official document that updates every several months and is briefly titled Transmission of SARS-CoV-2. It bears the signature of the Center for the Coordination of Health Alerts and Emergencies that directs Fernando Simon.

Health collects in this report the fact that the Wuhan virology laboratory suspected of the leak was working on the sequencing of the coronavirus strain RaTG13. A pathogen that was discovered among bats that inhabit a cave in Yunnan (China). The finding was in 2013 and the virus shares its structure 96.2% with the SARs-CoV-2 produced by Covid.

As reported by Health, this Chinese research institute in Wuhan moved to its new location in December 2019. Now it is near the Huanan market, where the first outbreak was decreed.

‘Such movements can be detrimental to the operations of any laboratory. However, all three laboratories working with CoV diagnostics and / or CoV isolation had high-level biosafety facilities (BSL3 or 4) that were well managed, with a staff health surveillance program. During the weeks / months prior to December 2019 there were no cases of respiratory disease among workers, “he warns, in the same line of what China says to defend that its management of the crisis was not negligent.