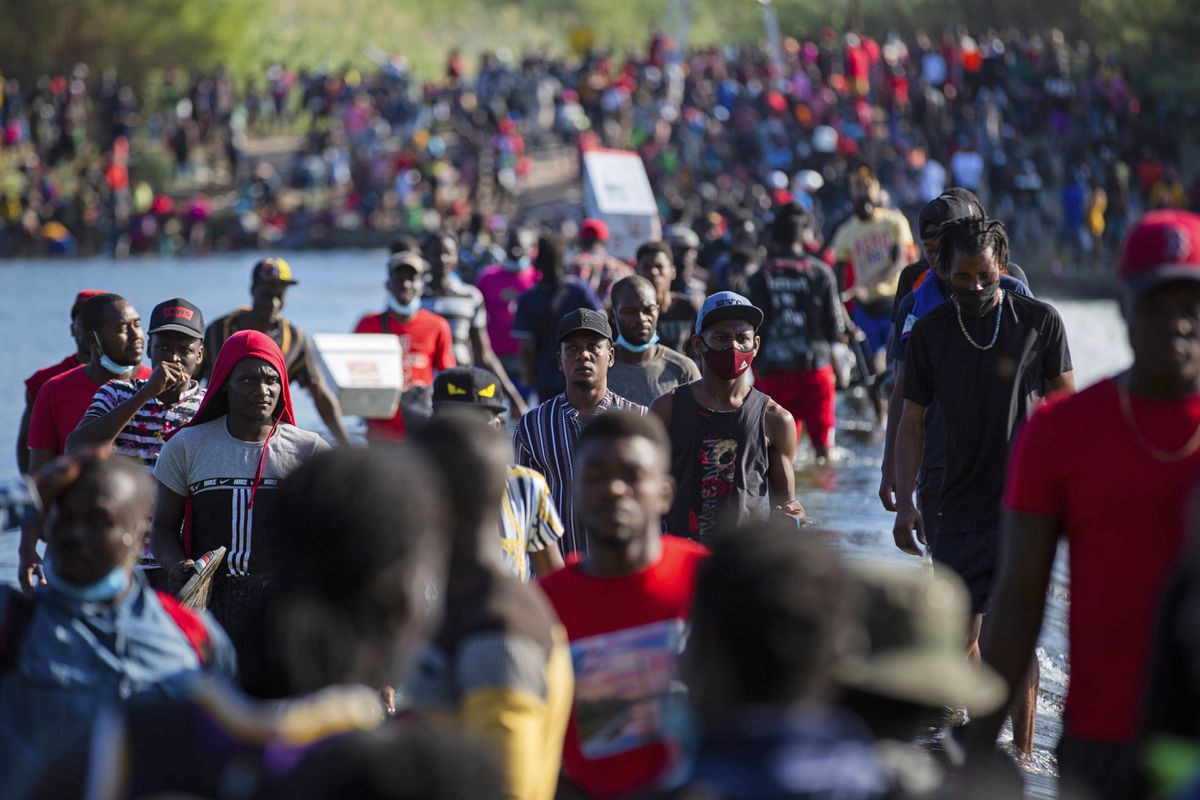 More than 10,000 Haitian migrants held in a precarious camp under a bridge in South Texas

More than 10,000 migrants, mainly Haitians, are being held by the US authorities in a makeshift and massive camp under the Del Río international bridge, which connects Ciudad Acuña (Coahuila) with the State of Texas. The migrants, including Cubans, Venezuelans and Nicaraguans, crossed Mexico in a caravan that managed to avoid immigration controls, and began to enter the United States irregularly on Thursday. Reuters sources present on the ground have described the settlement as “precarious”, and denounced lack of resources, food or people sleeping on the ground with just a blanket.

The first migrants crossed the border into Texas on Thursday morning, about 2,000 people who settled under the Del Rio International Bridge in the hope of being able to get asylum papers in the United States. On Thursday afternoon the number grew to 8,200. This Friday there are already 10,513, as reported by the mayor of the town, Bruno Lozano, who has also urged the US president, Joe Biden, to take action on the matter.

Just under 50,000 residents live in Del Rio, located in Val Verde County. In other words, the camp accounts for the same as 20% of its population. The town can be reached from Mexico through the Rio Grande, through a sector where the water is shallow and you can walk to the other shore. In fact, according to testimonies collected by The New York TimesMany of the inhabitants of the makeshift settlement cross into Mexico, where food and hygiene products are cheaper, and then return to the American side. In several photos, migrants are seen wading through the river loaded with pallets of water, boxes, supplies of various kinds and even children on their shoulders.

In other images, groups of people rinse their bodies and then rinse off in the river, wash their clothes and, the most fortunate, set up tents between its channel and the bridge. The choice of the place as a point of custody, according to the Border Patrol, is due to the fact that the shady areas under the viaduct are being used to house the migrants, and thus avoid possible heat stroke or sunstroke, since the temperatures are around 38 degrees.

Tony Gonzáles, a Republican congressman, has denounced in an interview with CNN that the situation is “a humanitarian crisis”: “It is very hard, there are only a few toilets, the Border Patrol does everything it can, but this goes beyond its control needs to be taken seriously by the Administration ”. Local authorities have denounced that border agents, who are awaiting reinforcements, are overwhelmed by the situation.

Greg Abott, the governor of Texas for the Republican Party, tried on Thursday to close six border points “to prevent the caravans of migrants from infesting the State,” according to Efe., although the measure has been reversed by the Biden Administration. Abott has criticized the government’s decision, and has even gone so far as to compare the situation in Del Rio with the evacuation of US troops from Afghanistan.

Under the pretext of the coronavirus pandemic, former President Donald Trump used a legal subterfuge that allowed to expel “hot” migrants who had entered the country informally, considering that it could constitute a risk to public health. The measure, known as Title 42, expressly prohibited the congregation of irregular migrants in the same space, which would have made the mass camp completely illegal, but this Thursday, a federal judge overturned the controversial rule, arguing that it was “Probably illegal” as well as unnecessary, considering “the wide availability of tests, vaccines and other minimization measures”.

The arrival of Haitian migrants to the southern US border has become common. Haiti is suffering a serious humanitarian crisis, the product of a decade of political and economic instability that followed the 2010 earthquake; the assassination of its president, Jovenel Moïse, last June, and a new earthquake of magnitude 7.2 that left more than 2,000 dead this August. Faced with this situation, the White House decided to reduce deportation flights to the Caribbean country.

Ted Cruz, a Republican senator from Texas, has charged Biden and Vice President Kamala Harris for their “open border policy.” In a video posted on his social networks in which you can admire the precarious conditions of the camp, he has demanded that the Government reinstate the return policy. “It is one of the most horrible things I have ever seen. It is inhuman and barbarous, ”he insisted, referring to the situation in the settlement.

The number of crossings across the southern border of the United States has multiplied this year: of the 458,088 arrests made by different security forces in 2020, it has risen to 1,541,651 in 2021, according to Customs and Border Protection data. Experts point out that among the probable causes is the worsening of poverty in Central American countries due to the coronavirus pandemic, the increasingly serious and common natural disasters or violence. To the bulk of irregular migration, the countries of the Northern Triangle of Central America —El Salvador, Guatemala and Honduras—, the current context has incorporated people from Haiti, Venezuela or Nicaragua, nations that have seen significant population flows leave due to the political and economic instability.