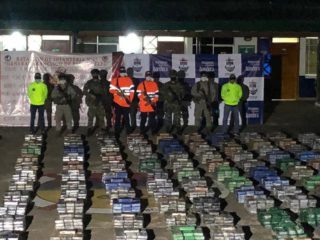 Colombian authorities seized 5.4 tons of cocaine hydrochloride that was being sent to Central America in the last hours. As reported by the National Navy on Wednesday, the alkaloid was located in the northwest of the country, in the Ciénaga Limón sector (Chocó department), as part of an international operation with the help of agents from Panama and the United States.

Through intelligence information provided by the Colombian Navy, the Units of the National Aeronaval Service of Panama managed to detect a suspicious vessel in its territory. Upon noticing the tracking, the high-speed boat began its escape into Colombian waters, towards the mouth of the Atrato River in the Urabá Chocó, where air-naval units managed to arrest it.

⚓Know the details of the blow to the finances of the GAO Clan del Golfo by authorities of Colombia, Panama and the United States, when locating an illegal deposit with 5.4 tons of cocaine hydrochloride in Ciénaga Limón, #Choco, ready to be shipped to Central America. pic.twitter.com/zvKjjlpTEi

Inside the vehicle there were 81 sacks with cocaine hydrochloride and another 147 were discovered hidden among the wooded vegetation of the area, for a total of 5,463 kilograms of this narcotic.

“With this seizure they were affected in $ 185 million the finances of the Organized Armed Group, Clan del Golfo, which commits crimes in the sub-region of the Gulf of Urabá, “the Navy assured, adding that in turn it prevented that”more than 13 million doses of cocaine will be traded on illegal international markets. “

🚨 In the last hours, 5.4 tons of alkaloid were seized at the mouth of the Atrato River in the Chocoano Urabá, affecting in 185 million dollars the finances of the GAO “Clan del Golfo” that commits crimes in the sub-region of the Gulf of Urabá.https://t.co/AHeDxDFOMUpic.twitter.com/DYc7JvedvW

It is presumed that the drug would be transported in several other vessels bound for Costa Rica, from where it would be distributed to “North America, Europe and Asia.” After having achieved this “millionaire impact on drug trafficking organizations in Colombia”, the Navy assures that it will continue its “coordinated, combined and multilateral” operations to avoid the use of national and international maritime spaces for the trafficking of illicit substances.