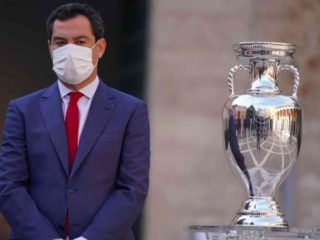 The President of the Junta de Andalucía, Juanma Moreno, has denounced this Friday the «lack of planning and rigor»In the vaccination of the players of the Spanish selection, which took place at the “last minute” and barely two days after his first Eurocup match.

Finally, the Army has vaccinated the footballers this Friday on the Las Rozas Football City (Madrid). Players who have already suffered from the disease have received doses of Pfizer while those who have not yet passed the Covid-19 have been vaccinated with doses of Janssen. All this within 48 hours of the debut of the National Team, with the consequent risk of suffering side effects.

Juanma Moreno, in statements to journalists after attending the Home of Giants inauguration in Malaga, has considered “Absurd” this delay, pointing out that “if the athletes who go to the Olympics have been vaccinated, and some of the players on the national team are also Olympians, why haven’t they been vaccinated at all?”

“Someone has not done their homework and there has been no sensible planning” for a Euro Cup like this to be reached. It has been waited for the last moment, when there is already a problem, when we have already been international news», He stressed.

The Andalusian president has concluded lamented “that there has been a lack of planning, rigor and not being on the issues, which is what has happened in this Government in terms of Covid. Mistakes have been made that we are paying in terms of image of Spain and that worries me”.

You will not need PCR to go to La Cartuja

The Ministry of Health and Families of the Junta de Andalucía announced this Thursday that will not require any antigen tests or PRC tests to fans who have purchased tickets for the Eurocup matches to be played at the La Cartuja stadium In sevilla.

This has been communicated by the department headed by Jesús Aguirre on social networks before the controversy caused by the fact that the UEFA announced that the ticket owners were required to submit a Negative PCR of Covid-19 or an antigen test to gain access to the stadium, with the consequent additional cost derived from carrying out the tests.

The La Cartuja Stadium in Seville will host four Eurocup matches from June 14 to 27, with a 30% maximum capacity, that is to say, of about 16,000 spectators. The first match will face the Spanish National Team against Sweden next Monday at 9:00 p.m.