Mutation within the Italian right 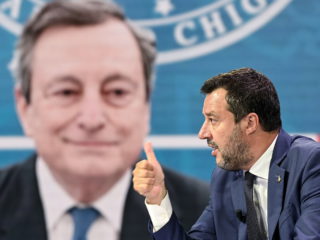 Politics in Italy is transformed, evolves and exchanges the faces of its representatives depending on the electoral laws of each moment. The coalition scheme is the one that has been appropriate in recent years in the light of the current norm. The left has not wanted to assume it until now. And, partly because of that, the one known in Italy as the center-right, the bloc formed by Forza Italia, the Liga and Fratelli d`Italia, has managed to govern in 12 of the 20 regions of the country and have a force that would presumably help it reach to the Chigi Palace. The interesting thing is to observe how the balances of forces change within these electoral artifacts. And in the case of the conservative world there are three elements that sustain the mutation: Matteo Salvini’s journey to moderation with the League, the unstoppable rise of the leader of Fratelli d’Italia, Giorgia Meloni, and the implosion of Forza Italia de Silvio Berlusconi in different meteorites that represent the remains of the liberal center-right and that everyone wants to see land in their ranks.

The last jolt in the seismograph on the right comes from the universe of the League, but it sums up the three drives in motion. Salvini, former vice president and former interior minister, has proposed this week to form a federation of parties that make up the conservative spectrum, except for the one led by Giorgia Meloni (better valued than the leader of the League by the Italians). Salvini’s pretext is that, in this way, the issues that concern the Executive can be addressed in a unitary manner. Something that must inevitably be done without Fratelli d’Italia, the only party that decided to stay out of the National Unity Executive and that today begins to collect the fruits of that decision in the polls. “We will speak with one voice and, in this way, we will accelerate the approval of decrees, of amendments, we will facilitate fiscal and justice reforms,” ​​said Salvini to explain the nature of his new invention. But, deep down, the leader of the League thinks of an artifact similar to the one that Silvio Berlusconi built with the People of Freedoms, where he brought together all the right-wing parties with unquestionable electoral success and a single leader.

The decision to keep the far-right party out of the Executive proposed by Draghi in February has allowed Meloni to gain almost 5 points since then (13 since the European elections) and to be one step away from being the new reference of the right. As the agreement between the three parties that made up the coalition until now is proposed, whoever gets one more vote in the elections leads the artifact and becomes the candidate for prime minister. And the Roman leader cherishes that moment in the latest polls. His formation is already positioned as the force with the second highest vote estimate (with 19%), tenths ahead of Enrico Letta’s PD, and only two points in the league. “It has not been only because of the opposition role, which is difficult to do with Draghi due to his unquestionable prestige. Also because of how he has gained authority in different economic and social worlds ”, sources from his party point out.

Salvini’s strategy, a form of castling in the face of growing friendly fire, does not worry too much at Fratelli d’Italia, where they see a desperate attempt to grow back in the polls. “He is looking to expand his political space and push us further to the right. In recent times he has burned relations with the center by heeling too far to the right on many issues and now he seeks to correct it by approaching Berlusconi. But it’s like when a family marries a nobleman for promotion. We maintain our position. That does not change anything, and the center-right will remain united for the administrative elections in October ”, points out one of the heavyweights of the party.

Salvini, as published The Corriere della Sera, is spending 7.5 times more than what it used to do on covert propaganda on its social networks (351,000 euros in a year). The leader of the League strives to propose initiatives, on a national and European scale – he wants to form a new large group that unites the two spaces that remain to the right of the European People’s Party – that will make him the visible head of this new spectrum . But at the same time, he tries to distance himself from the most radical part and approach the positions of the PPE – “if everyone were like Isabel Díaz Ayuso, there would be no problem,” he said in an interview with MRT-. “The natural space of the League has always been close to businessmen and the productive sector of the north. This movement is not strange ”, point out party sources, who compare the movement with the one that Marine Le Pen is also carrying out in France.

The Forza Italia ship, meanwhile, is heading for the rocks. Berlusconi, 85, has never even wanted to hear about appointing a successor despite being seriously ill and splits are counted on weekdays. “I have not had dolphins, but sardines,” he once summed up. Now he has agreed to talk about this supposed federation under the condition that his partners allow him to dream of the idea of ​​being president of the Republic, his last great delusion – he is still awaiting judgment of the latest scandal for the parties with alleged minors at his home in Arcore-, in the election next February. But Salvini, in public and in private, has already said that he will push for Mario Draghi’s candidacy to speed up the general elections.

The families of the European extreme right sometimes have something of Game of Thrones. To the consanguineous disputes seen within the old National Front of Marine Le Pen – her niece, Marion Maréchal, much more radical, decided to leave, and her father, Jean Marie, was expelled by loudmouth – was later joined by the relationship with another of the greats Ultra lineages of Euorpa: the League.

Maréchal herself is the partner of the Italian Vincenzo Sofo who was a MEP for Salvini’s party. A Milanese of Calabrian origin trained and with strong nationalist leanings (he was always against the centrist transformation of the party). Until now it had functioned as a hinge between the two worlds, but he decided to leave the League and join the ranks of the Brothers of Italy, the fashionable party in the ultra-European universe.

Meloni has reserved a position for him as coordinator of the Mediterranean Consultation and has announced his incorporation to the four winds. The signing urges on the wound of a weakened League that loses some of its cadres, interested in jumping to the game with greater momentum. Sofo underscored that idea on the same Monday. “Today the motivations that made me leave the league are still more valid. I am not against the idea of ​​a federation of the center-right, but the direction taken, with the risk that the government forces end up forming something like the People of Freedoms, does not allow me to agree ”.