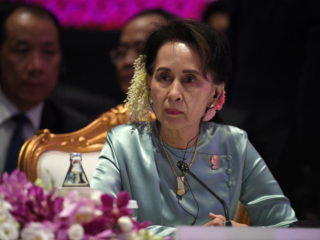 The military who seized power in Myanmar (formerly Burma) last February do not want to leave any loose ends in their persecution of the leader de facto of the deposed civil government, Aung San Suu Kyi. Four days before she is tried, on June 14, the military regime has presented this Thursday a new accusation against the 1991 Nobel Peace Prize winner, this time for corruption. It is the seventh and most serious of the charges against her – which carries a sentence of up to 15 years in prison – of a litany of charges that her lawyers consider politically fabricated to remove her from power.

According to a statement from the Burmese Anti-Corruption Commission, controlled by the uniformed, Suu Kyi illegally accepted $ 600,000 (about 493,000 euros) and an undetermined amount of gold from the governor of Yangon, the country’s largest city. He also accuses her of using her authority to facilitate the rental of a property in that same city to a charity that she founded in 2012, and that would have caused losses to this municipality of 3.15 million dollars.

“The Anti-Corruption Commission has investigated corruption cases against former State Councilor Aung San Suu Kyi. She has been found guilty of committing acts of corruption taking advantage of her title ”. Senior government officials can face a maximum of 15 years in prison if found guilty of this crime. Suu Kyi has been a Myanmar State Councilor since 2015, when her party, the National League for Democracy (NLD), won the election. By not being able to be sworn in as president because the Constitution – drafted by the military in 2008 – prohibits someone with a foreign spouse or children from being one – a clause designed against Suu Kyi, the widow of a British academic -, the title of State Councilor was created. , under which he ruled in fact.

The daughter of General Aung San, considered the hero of Burmese independence, has been detained since February 1, when the military staged a coup, alleging without evidence an alleged electoral fraud in the elections of last November, which was widely won by the NLD. Since then, she has been accused of different crimes, the most serious being up to now that of violating the Official Secrets Law, which can mean a maximum of 14 years in prison. She has also been accused of illegally importing some walkie-talkies and to violate the regulations imposed to stop the spread of covid-19 during the electoral campaign, among other alleged infractions.

Accusations that her lawyers consider unfounded and concocted to remove her from possible elections in the future, which the military promised to call in the next two years. Khin Maung Zaw, one of her lawyers, has called the corruption charges “absurd” and has denounced that their objective is “to keep her out of the political scene,” according to AFP news agency.

Burmese politics, who spent 15 years under house arrest during the half-century of power of the former military regime (1962-2011), has only been seen once since her arrest, during a court hearing on May 24 in the capital, Naypyidó. . Although in principle the junta kept her confined in her home in this city, last week the self-appointed Burmese clandestine civilian government – made up of allies of Suu Kyi who oppose the military – assured that she had been transferred and her whereabouts were unknown.

The trial begins next Monday and is expected to conclude on July 26. Despite the military’s attempts to seize power and remove Suu Kyi, the policy continues to be highly acclaimed by the population, who have called for her release en masse in massive demonstrations almost daily since the riot. Protests suppressed with violence by the security forces, responsible for the death of at least 849 civilians and the arrest of almost 5,000 people, including Suu Kyi and other members of her government, according to the Association for the Protection of Political Prisoners Burmese.