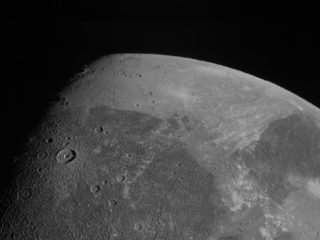 NASA’s Juno mission probe has captured close-up images of the surface of Ganymede, one of Jupiter’s moons, for the first time in two decades. informs at NASA.

Juno probe approached 1,038 kilometers of the surface of Jupiter’s largest moon, more than any other spacecraft in more than 20 years. The last to do so was NASA’s Galileo space probe in 2000.

Hello, old friend. Yesterday our #JunoMission made the first close flyby of Jupiter’s giant moon Ganymede in more than 20 years, and the first two images have been received on Earth. 📸 More to come. See details at: https://t.co/zIVMO6waKHpic.twitter.com/2RiW3iSmIp

NASA published the first two images of the celestial body on Tuesday. The first was obtained by the Jupiter orbiter’s JunoCam imager and the other was obtained by its Stellar Reference Unit navigation camera. Both show “in remarkable detail” the surface of the moon, including its craters, and long structural features, possibly linked to tectonic faults.

“This is the closest a spacecraft has come to this gigantic moon in a generation,” said Juno principal investigator Scott Bolton. “We are going to take our time before drawing scientific conclusions, but until then we can just marvel at this heavenly wonder.”