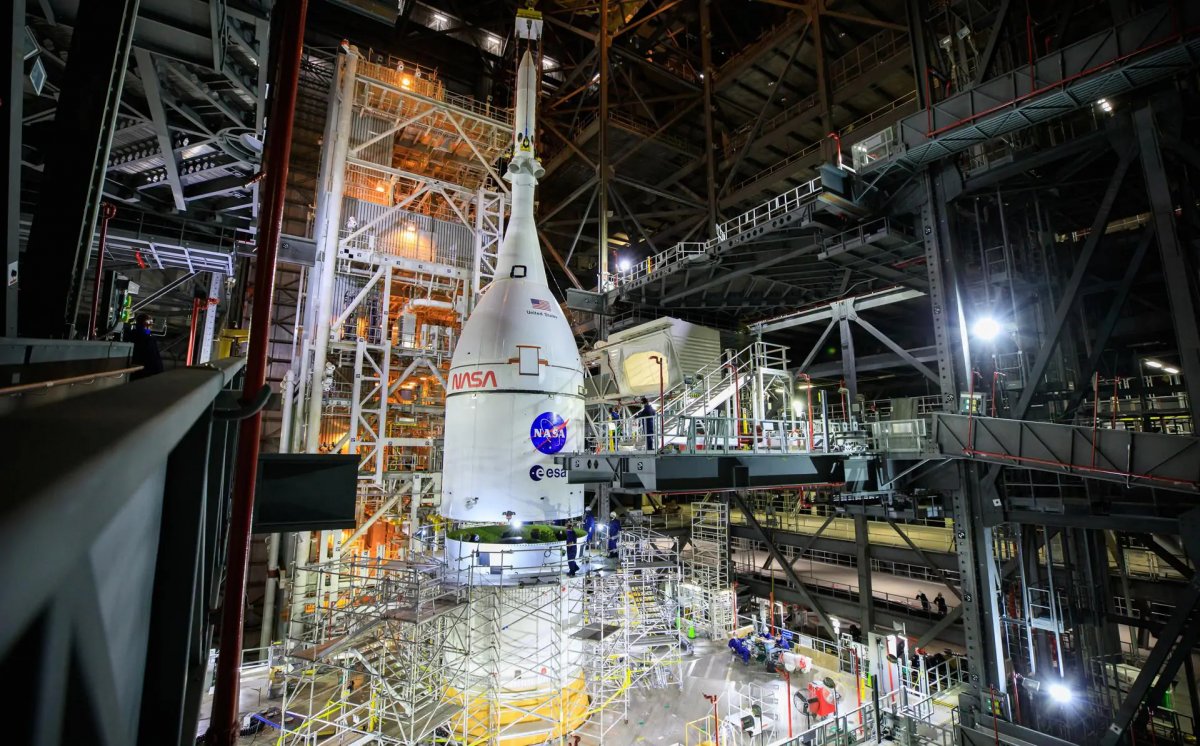 The US space agency NASA has completely assembled the giant rocket SLS (Space Launch System) and has scheduled the start of the Artemis-1 mission for February 2022. The space agency has thus officially confirmed the postponement to next year for the first time, after the SLS should actually have taken off for its first flight in November. Technical problems and the corona situation around the NASA launch center in the US state of Florida had led to delays.

The SLS has been in development for years and is the basis for the Artemis program, which envisages a return of humans to the moon. The first launch of the giant rocket will be the second – still unmanned – flight of the Orion space capsule and should bring it on a course around the moon. The flight was originally planned for 2017, but it was delayed further and further. Recently there was also a problem with the Orion capsule, but according to NASA that did not contribute to the further delays.

But now the giant rocket is complete, like NASA reports. The rocket and capsule will now undergo further testing before the SLS is transported to the launch pad later this year. The dress rehearsal for the start is planned for the beginning of January. The rocket is refueled and the start is simulated, whereby the countdown is stopped shortly before the ignition of the four RS-25 drives. The SLS rocket drive for the NASA moon mission had already been successfully tested in March of this year, but on its own and without being mounted on the rocket.

According to the Space Agency, the first launch window will open on February 12, 2022 and will remain open for two weeks, like SpaceNews reported. However, NASA has already announced alternative dates. Further start options are between March 12 and 27 and between April 8 and 23, 2022. If the start takes place at the beginning of the time window, the mission will last six weeks, otherwise only four.

The difference is due to the orbit of the Orion capsule around the moon. The space capsule would turn one more lap around the moon with an early SLS launch. The aim of the first, as yet unmanned Artemis mission is to find a suitable landing site on the moon for subsequent lunar excursions.

No schedule for manned Artemis missions yet

The timing of the launch also has an impact on the manned Artemis missions. A NASA employee recently stated at an event that there would be 20 or 21 months between each Artemis mission because the rocket and capsule are reused. Should Artemis-1 take off in February 2022, the second Artemis launch would not take place until the end of 2023. The Artemis program was actually supposed to bring people into space with the third launch of an SLS in 2024, who are then to land on the moon.

Another postponement of the space launch system and the expected admission that there will not be enough manned flights to the moon in 2024 should result in further massive increases in costs. Most recently, NASA’s inspector general had calculated that total costs would amount to 86 billion US dollars – more than twice as much as originally estimated. It was also recently announced that the spacesuits intended for this purpose would not be ready by then.

However, NASA now only stated that the schedule for Artemis-2 was still too uncertain for dates. This will be evaluated in the next few weeks and only then can answers be given on the timing of the next mission. NASA still has a lot to do to get a manned capsule ready for spaceflight.