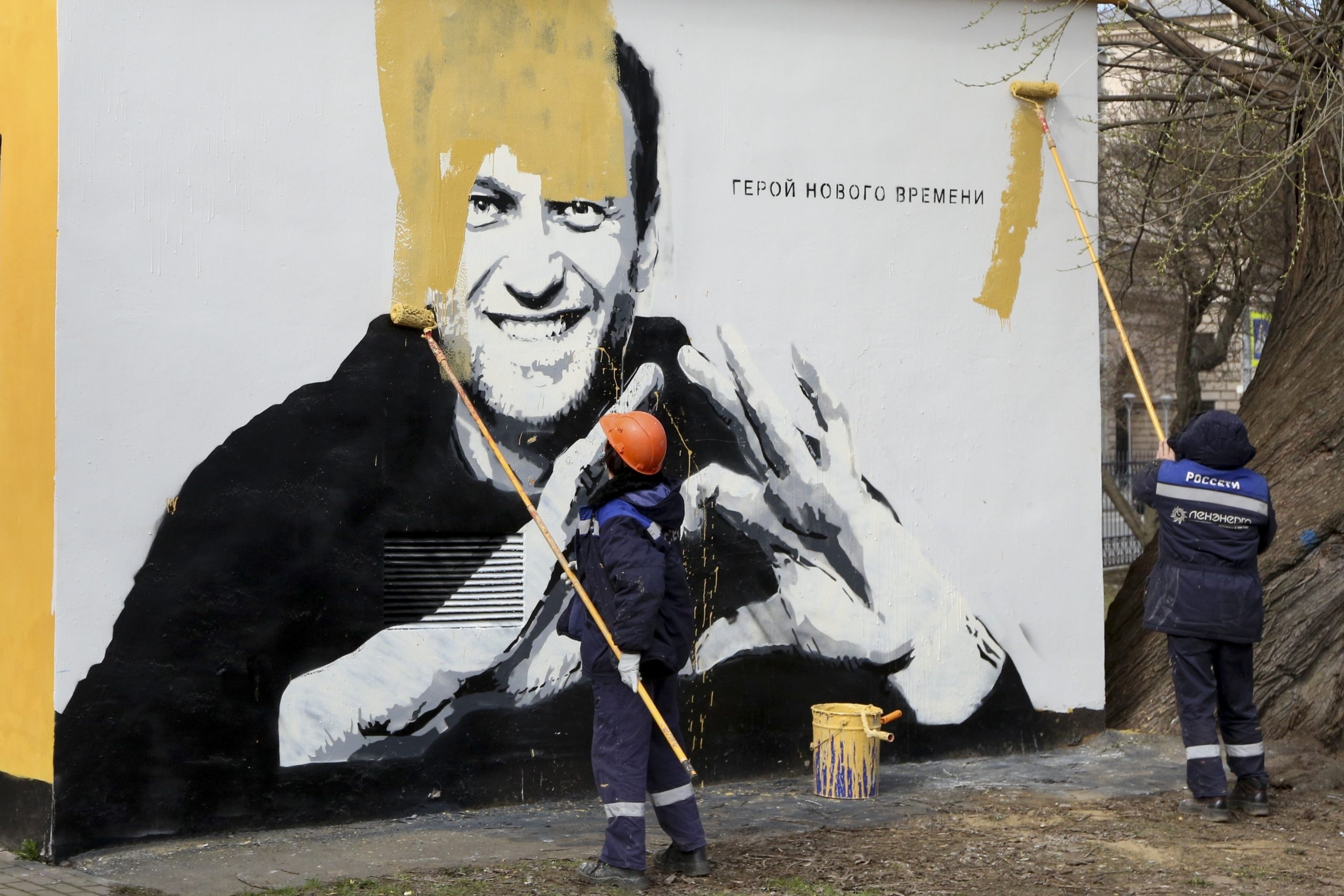 All against the Kremlin and anyone better than their leading party, United Russia. This is the axis of the campaign with which the team of the jailed opposition Alexei Navalni tries to prevent the formation supported by the Government from revalidating the parliamentary supermajority in this weekend’s elections throughout Russia. The initiative, which seeks to undermine the ruling party, is called “smart vote” and proposes to unify opposition voters around the candidate who has the best chance against United Russia. The system, designed by the dissident’s team from outside Russia in the form of an app and digital information, is already facing blocking attempts by the Russian authorities.

In the elections that begin this Friday and that the Government has wanted to control to the extreme, vetoing important opposition figures and almost all of Navalni’s allies, the smart vote means an attempt to hit the Kremlin. Even if that means that, according to that recipe, a liberal would vote for the recommended communist candidate or a nationalist for a liberal. Furthermore, paradoxically, the Iiteligent voting list can reinforce the so-called “systemic opposition”: the Communist Party and the ultra-nationalist LDPR, opposition formations on paper, but which on key issues support the Kremlin.

A group of Navalni collaborators, including Ruslan Shaveddinov, have been working on that list for months. Its premise is that to defeat United Russia it is necessary to unite the protesting voices and vote for their strongest rivals in each of the constituencies, says Shaveddinov, who went into exile for months. Navalni, despite the fact that he remains in prison, has emerged as one of the protagonists of these legislative elections.

Smart voting is not an algorithm, explains Shaveddinov on Telegram, but a list made after studying all the candidates. To opt for one or the other, the political history of the city and the region, the biography of the politician and his experience, his campaign, his presence on social networks is analyzed and local experts are even consulted. “This strategy can work if people come and vote in a consolidated way. And we are sure it will work! ”Says the 25-year-old opponent, a Navalni ally, who was arrested last year and sent to do mandatory military service in a remote part of the Arctic.

The Duma has 450 seats elected in a mixed system. Half are chosen proportionally from the party lists; the remaining 225 belong to districts where only the most voted person is elected. That is where this instrument comes in to concentrate the dispersed vote of the opposition. According to the list, more than half of those recommended (137) are from the Communist Party, although a few months ago, the historical leader of the formation, Gennadi Zyuganov, described Navalni, who had just returned to Russia after recovering from poisoning. almost mortal behind which the hand of the Kremlin can be seen, as a “traitor who came to set the country on fire”. The communists are followed by far the populist LDPR (20), the democrat Yábloko (10) – in which Navalni was a militant – and even a newly created one who does not hide his support for Putin, New People (5).

The goal, Navalni’s team points out, is to weaken United Russia in any way and thus have to make concessions to rival parties. “Deputies elected by smart vote will be able to participate with more confidence in debates and ask uncomfortable questions, insist on decisions being made,” says the dissident’s team, citing their success in the 2020 Moscow Duma elections as an example. , which made it possible to promote social measures that Putin’s party rejected, such as a subsidy for the so-called “children of war”.

The problem for United Russia is the single constituencies, in which in 2016 – when a healthier political climate reigned for training – it won 203 of its 343 seats. To achieve the qualified majority you need 301. Although, given the traditional support of the Communists and the LDPR, it is not such a substantial question on paper, says Grigorii Golosov, head of the Political Analysis area of ​​the European University of Saint Petersburg. “United Russia controls the absolute majority, but is afraid of losing it. Their popularity is declining and the opposition grows in parallel, ”says the expert, author of a study that confirms that Navalni’s initiative managed to boost opposition candidates in the 2019 and 2020 local elections.

And when the level of support for United Russia is low (at 29%, according to the state pollster VTsIOM), the Kremlin is restless and takes the effects of the Smart Vote seriously, says Andrey Kolsnikov, Russia’s head of internal policy. at the Carnegie Thought Center in Moscow. “This is just a tool to show the authorities that there are ways to weaken them,” he says. “The government gives it importance and is irrational, because any vote for a ‘systemic party’ is a vote for power. For a voter with a democratic ideology, supporting the Communist Party or the LDPR is impossible, he will stay at home or vote for Yabloko. For someone without ideology, it will be a protest vote against everything and, in a psychological sense, it is like voting for Navalni ”, he adds.

The historic Yábloko Democratic opposition party, which has been losing steam over the years, questions the transparency in the preparation of the Navalni team’s list and the spirit of this tool. “It is bad for democracy, it diminishes faith in it. It is a vote of distrust against everything, people do not vote so that they represent their interests ”, criticizes Iván Bolshakov, head of the Political Analysis department of the formation. “It benefits fifth-column parties that have supported laws that repress other politicians,” adds the politician, who minimizes the impact of smart voting in previous elections.

Despite everything, Golosov warns, the effectiveness of the “smart vote” depends on electoral transparency. “Voting online is suspicious,” he says after recalling that, in what civil rights organizations have described as the least transparent elections in the recent history of the country, they have also increased the limitations for a citizen to be an observer.

Navalni’s initiative could however also divide the opposition vote and further confront divided Russian dissent. Marina Litvinovich, Yabloko’s candidate for one of the Moscow districts, considers it a “mistake” that the Navalni team did not support her. “You can vote smart or you can vote with your heart,” writes politics on Facebook.

On the eve of the voting for the legislative elections, Russia’s telecommunications regulator (Roskomnadzor) has raised its threats against large technology platforms, such as Twitter, Facebook and Alphabet, Google’s parent company, on charges of interfering in the elections. The underlying reason, access to Navalni’s proposals through them.
“We are going to consider imposing fines according to the volume of business to the companies that systematically violate the warnings”, emphasized the deputy director of Roskomnadzor, Vadim Subbotin, to the Interfax agency. Until now, these multinationals had been punished with small fines for accusations such as violating data protection or allowing illegal content to be viewed. One of the most striking cases is that of Twitter, whose traffic was slowed by not deleting illegal posts, such as suicide-inducing material, according to the regulator, just as protests began over the activist’s arrest.
In addition to the pressure on social networks, the authorities have also vetoed a series of popular VPNs, tools that allow camouflaging the user’s address and access to censored web pages, such as smart voting. “Although it is not easy for one user, hundreds of thousands of people use it and millions more use the Telegram application and bot. In different ways, despite the blocks, we can deliver our recommendations to the supporters of the vote smart, “says Ruslán Shaveddinov, manager of the Navalni Anti-Corruption Foundation.
The initiative has been in the sights of the Russian authorities since it announced its launch at the end of 2018. Immediately afterwards, a Moscow court ordered to block it for “breaching data protection” of its users, although it worked the following two years without major problems. It was in this electoral campaign, of which the Kremlin has tried to erase any dissident voice from the map, when the harassment increased: in June, while the justice system declared the organizations linked to Navalni “extremists”, the addresses of your subscribers. A month later, a Stavropol wool company registered the trademark “smart voting” in just weeks when procedures in Russia usually take up to a year, and in September a Moscow arbitration court banned Google and Yandex (Russia’s most popular search engine). ) show initiative in your results.
In between, in August, the federal telecommunications service blocked access to all the websites linked to Navalni and demanded that Apple delete its application, while the police went to the homes of the hundreds of users of the voting tool to give them a Notice that to many sounded like a threat: more of his data had been leaked on Telegram. Finally, ten days before the elections, the Navalni team backtracked and announced that it was not necessary to register to see the list of recommended candidates. / Javier G. Cuesta