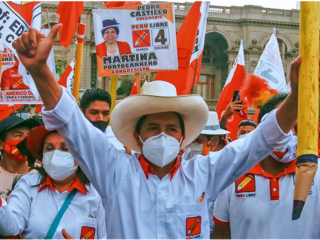 Peru protested this Thursday to the Argentine government after Alberto Fernandez recognize as president-elect Pedro Castillo, amid strong uncertainty about the result of the ballot in that country.

“In view of the expressions of the President of the Argentine Republic, Alberto Fernández, made on that date, the Government of Peru has been obliged to submit a Protest Note to the Ambassador of the Argentine Republic, indicating that the final results of the 2021 General Elections have not yet been announced by the electoral authorities of our country ”, indicated an official note released by the Peruvian Foreign Ministry.

What did Alberto Fernández say

The response of the Peruvian Foreign Ministry occurred shortly after the Argentine president, through his Twitter account, recognized as “President elect” a Castillo even though he was not proclaimed the winner yet by the electoral authority.

In the midst of this contested electoral panorama and after a formal request from Fujimori to annul some 200,000 votes, Alberto Fernández became the first president to recognize Castillo’s triumph. Two ex-presidents of the region, such as Evo Morales Y Luiz Lula da Silva, also recognized the eventual victory of the Peru Libre candidate.

The second diplomatic counterpoint in 24 hours

With his comment, this time via Twitter, Alberto Fernández once again generated a diplomatic counterpoint with a country in the region in just 24 hours. On Wednesday, while meeting with his Spanish counterpart Pedro Sánchez, he provoked the fury of the Brazilian government of Jair Bolsonaro and the press of his country after stating:

Faced with the wave of criticism on both sides of the border, the president went out to apologize on Twitter: “I did not want to offend anyone, in any case, who has felt offended or made invisible, since now my apologies.”

// Finally the Copa América will be played

And he continued: It was stated more than once that “Argentines descend from ships.” In the first half of the 20th century, we received more than 5 million immigrants who lived with our native peoples. Our diversity is a pride”.