New Horizon Forbidden West details on the evolution of combat: animations, sound, stealth and much more 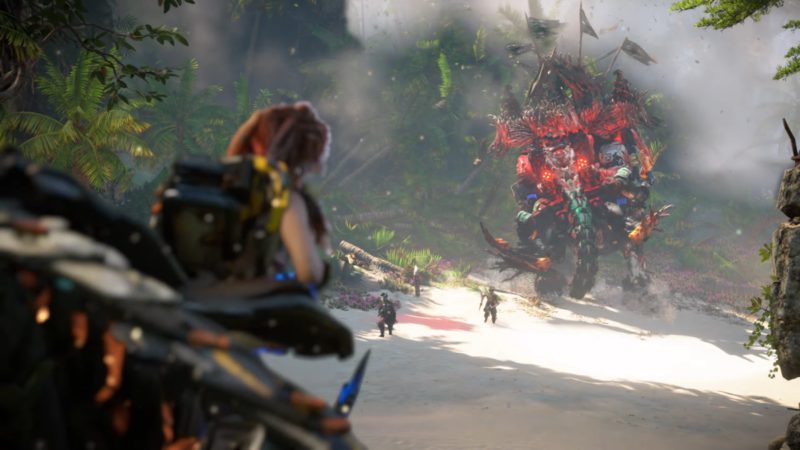 Horizon Forbidden West has proven that you will have beautiful landscapes and a new world to explore. The last presentation showed a bit of combat, although we were left wanting to know more. Now a new post on the official PlayStation blog has revealed more details on the evolution of combat, which includes better animations, more brutal execution movement and unique abilities.

“Aloy is a smart and agile fighter“says Charles Perain, combat designer.”In Horizon Forbidden West, the tools at your disposal generate a wide range of tactics that allow you to face physically stronger opponents, from humans in full armor to very large machines.”.

The priority for Horizon Forbidden West developers was “increase skill limit for players” with “melee combos“. In addition, they wanted to extend the gaming experience and “adapt to a variety of play styles and really focus on freedom of choice“says the PlayStation blog. All this with a design of enemies (known and new) that allows you to use different skills and tools to eliminate them.

“It was important to us that players feel that Aloy has grown in her skills and confidence through her adventures in Horizon Zero Dawn and Frozen Wilds.”Says Richard Oud, game animation director for Guerrilla.

“He gained a lot of experience and that needed to be reflected in his animations. Our goal was to show that Aloy feels more comfortable traversing her surroundings, without losing sight of the fact that she is human, of course, so things don’t always go perfectly for her.“And that also applies to AI, which will feel more natural and fluid, and which will adapt to the terrain they are on: “more machines are capable of swimming and have the ability to dive and chase Aloy underwater“, exemplifies the blog.

To make a more natural, fluid and brutal experience, the developers investigated “comprehensively to understand the anatomy and locomotion of a character”, explica Richard. “There are many differences between animating a human or a machine, however the central pillars of what we wanted to achieve with both were very similar.“The idea is that the player can identify the enemies and recognize them by how they are and their movements.

Enhancements to combat and enemies directly benefit stealth: “You can also escape combat by breaking line of sight and sneaking away. When enemies discover that you are not where they expected you to be, they will start searching. Human enemies band together and seek you out as a group, with the team leader giving orders and coordinating the work. Through animation and context-dependent speech, the player will have many clues to discover their next move.“.

The developers are aware that “some players prefer to take out enemies stealthily“. The objective of improving combat was to offer more possibilities of this type and that being discovered does not imply a direct combat by force, but that you can mislead them and resume the hunt.

In this context, the sound has also been heavily worked by the developers. It will be a friend to players, as they will be able to locate enemies and discern their next moves, but it will also be their enemy because enemies will respond to it. “These audio signals will help draw the player’s attention to the most imminent attacker or source of danger, allowing them to respond in time.“.

In Horizon Forbidden West there will be new enemies and each one will have their unique abilities, strengths and weaknesses, and their personality. Some machines will attack in groups and their aggressiveness will vary based on different factors. Even it will be possible to know the “state of mind” of the machine through sound: “If a machine is in an idle, non-alert state, it will hear much calmer, more sporadic, and natural vocalization stylized to reflect the personality archetype.“.

Keeping with the fluency, the development team focused on make a better transition between close combat and ranged combat, which during the first game could be rough and not very fluid. This means that it will be possible to combine both fighting styles to make combos.

The developers end the PlayStation blog by recalling that preparation and strategy remain a very important part of Horizon Forbidden West. “Machines can be formidable foes, each with their own unique rhythm and attacks, but players should be able to take control of the situation and win using different tactics.“The improvements to the combat system, the unique abilities and the familiar ones in Horizon Zero Dawn should offer a range large enough to add variety to the experience.

Horizon Forbidden West is scheduled to launch on February 18, 2022.