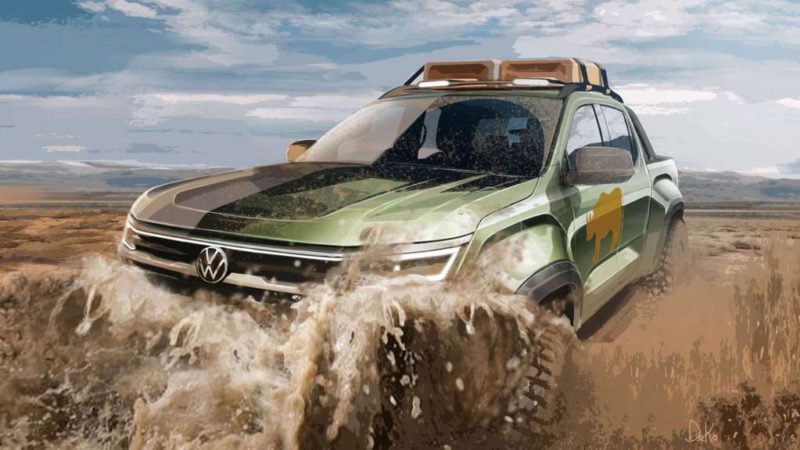 Volkswagen revealed two sketches of the new generation of the Amarok, the midsize pickup that competes in the Toyota Hilux, Chevrolet S10, Nissan Frontier, Renault Alaskan and Ford Ranger segment, with which it shares multiple elements. It will be launched on the international market in 2022.

How is the new Volkswagen Amarok

Judging by the images released by the German brand, the new Volkswagen Amarok It will be distinguished from the current model by the design of the grille, the headlights, the wheel arches, the bonnet, the alloy wheels and the side of the body.

It is the first time that the manufacturer shows the inside of the Amarok 2022. And the photo shows that it will have a new design for the steering wheel, digital instruments, renewed seats with different upholstery, a new lever for the automatic transmission with a rounded knob to select the traction mode and with a huge vertical central touch screen, faithful to the latest trend in the auto industry.

Volkswagen issued a statement in which it ensures that “the highlights of the new Amarok are undoubtedly its versatility and off-road capabilities”.

Furthermore, from Wolfsburg they anticipate that the second generation of the pickup not only has a completely new appearance inside and out, but also has “Even more extensive equipment on board”.

While the configuration for each market will be defined at launch, it is a given that the Amarok 2022 will have new driver assistance systems. “It will feature innovations that have not been seen before in this segment,” Volkswagen reported.

The new Amarok will share a platform and other elements with the future Ranger, but the German brand does not hesitate to affirm that it has given the pick up “An unequivocal expression, with a clear Volkswagen DNA”.

Will the new Volkswagen Amarok arrive in Argentina?

Developed by the Australian and European design and engineering teams of Ford and Volkswagen (a historic collaboration agreement was signed between these automakers for the new Amarok and Ranger), it has confirmed production for 2022 in South Africa. But nevertheless, will not arrive in Argentina.

Volkswagen confirmed that the previous generation will continue to be manufactured in Argentina; that is to say, the one that is sold today in dealerships. This means that the two generations will coexist worldwide, but only the first will be in the local market.

So, it is to be expected that Volkswagen will present soon a redesign of the Argentine Amarok to “wash your face” and not be so outdated compared to the new generation that will be sold in other countries, and also to remain competitive in an increasingly hot segment.