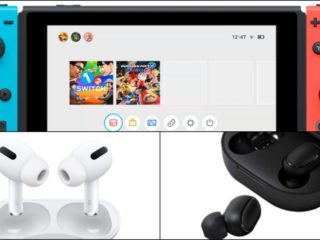 Nintendo has released the update 13.0.0 from Nintendo Switch. Hybrid console players, regardless of model, can now download this new firmware version; whose main novelty is the possibility of connect a Bluetooth headset and thus take advantage of this technology (Bluetooth 4.1).

The announcement has taken everyone by surprise. After version 13.0.0 is downloaded on Nintendo Switch or Nintendo Switch Lite, all headphones, speakers, earbuds, AirPods and other audio devices that comply with Bluetooth protocols can now easily connect to the console. In essence, this allows you to not have to rely on the traditional 3.5 Jack port and enjoy wireless audio during our gaming sessions. We summarize below some additional details included in the Nintendo Support Portal.

Other features of version 13.0.0 of Nintendo Switch

Also, there is a new tab called Keep Internet Connection in Sleep Mode. Thanks to the possibility of keeping the dock connected to the internet by cable as of October 8, it will be possible for a Nintendo Switch at rest connected to the network to keep the games updated; among other features. This setting will be enabled by default to facilitate the convenience of these updates. When we wake up the console, we will generally have everything up to date.

Finally, players can now visually check if they are using 2.4 GHz or 5 GHz frequency networks in section Connection Status from the Internet settings on a Nintendo Switch.

Annex: How to update your Nintendo Switch console

How to update our Nintendo Switch? The first thing we must do is connect our console to the internet. Then we go to Console configuration in the HOME menu, we select Console and Upgrade from the console. In a matter of seconds it will restart and we will have our Switch or Switch Lite updated to version 13.0.0. This process will also apply to the Nintendo Switch OLED starting October 8.