Now on sale I dreamed that I dreamed, a book focused on the narrative of Japanese video games 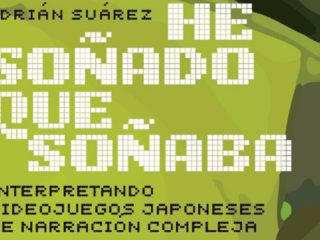 Start-T Magazine Books has announced that the book I Dreamed I Dreamed: Interpreting Japanese video games with complex storytelling It is now available. The work, written by Adrián Suárez, has begun to reach Spanish bookstores from today May 28, but the distribution will continue throughout the next week.

I have dreamed that he dreamed focuses his attention on the narratives of Japanese titles such as Silent Hill 2, Kingdom Hearts, Death Stranding, Final Fantasy XV, NieR, Dark Souls, 13 Sentinels: Aegis Rim or the Metal Gear saga. The author explains how to analyze these narratives, how to interpret them, their origins, their evolution and their connections, as well as the differences between Japanese and Western narratives. This new book continues the research that the author began in his previous work, The Father of Dark Souls: Hidekata Miyazaki through his work. Thus, all those who want to know more about this topic have the opportunity to delve into the narrative through this volume.

Adrián Suárez is a doctor from the University of La Coruña. He has specialized in game studies and video game narratives since 2018. As a writer, he has worked in the digital medium Mundogamers, which recently closed its doors. However, Suárez has not stopped collaborating in video game media, since it currently publishes texts in 3D Games. He also works as a professor of digital communication at the International University of La Rioja (UNIR), where he is part of a research group in which they study communication, audiovisual and artistic narratives in the digital society. In addition, he is a professor at CESUGA and at European Business Factory EBF.

Together with Álex Pareja, current coordinator of IGN Spain, he has published the book On Mario: From plumber to legend, 1981-1996.